On the August bank holiday weekend we visited Cottesbrooke Hall in Northamptonshire to see the gardens.  They had been featured on Gardener's World.   Adam Frost had met the head gardener, and had interviewed him about the development of the garden, its structure and design.   When he visited it was quite wet, but we were lucky and visited on a hot and sunny day. 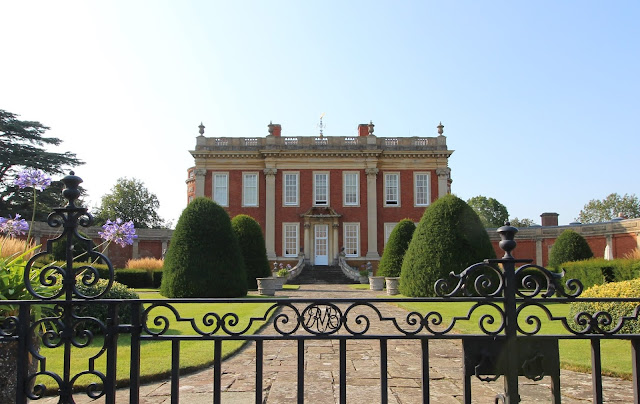 Many well known garden designers have been involved in the development of the gardens.  Geoffrey Jellicoe designed the forecourt garden shown in the picture above.  Prior to this, it had been the main entrance to the house.

The main gardens are sited to the left hand side of the Hall.  This shady border runs along the path from the entrance kiosk.  The border is unusually deep. 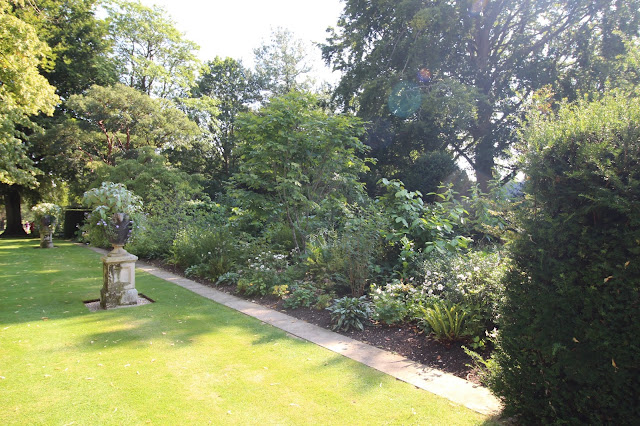 The underplanting of the small trees and shrubs is intricate with plenty to engage the eye.  There is an interesting variety of leaf shapes, with a scattering of flowers. 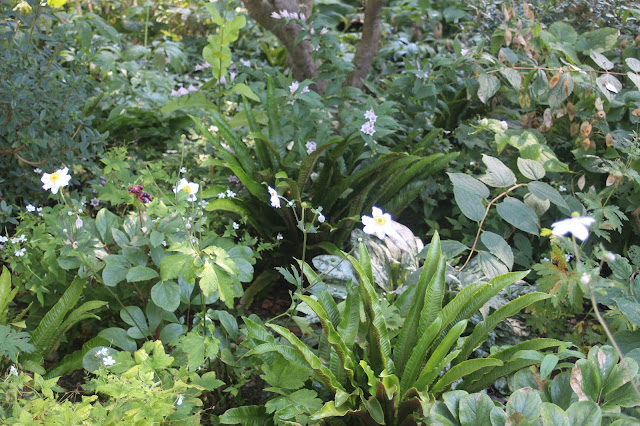 Toad lilies, Tricyrtis formoscana, are woven through the front of the border.    They are so delicate and pretty.  This is one plant I would like to add to my garden.  They like damp shade, I'm told. 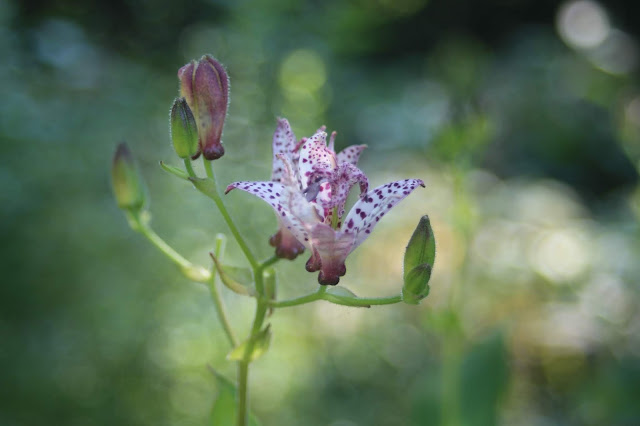 Another highlight of this border were these ripe seed pods with their black and red seeds. It looks like Peonia miokosewitschii to me. 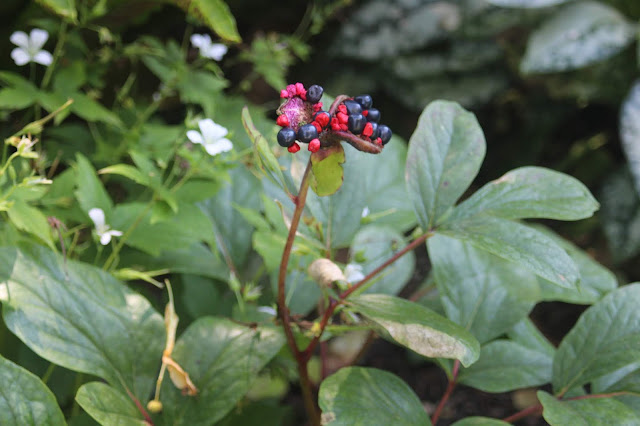 On the left, at the end of the shady border, is the Statue Walk.  This border was designed by Arne Maynard, whose gardens I really admire.  The plant palate is predominantly lilac, pale blue and pale pinks, offset with some deeper purples and crimson.  Opposite the borders are statues backed by a yew hedge.  The yew hedge has recently been cut back very hard, and looked threadbare, so there are no photos of it, but the quieter colours were chosen here in order not to compete  too much with the statues. 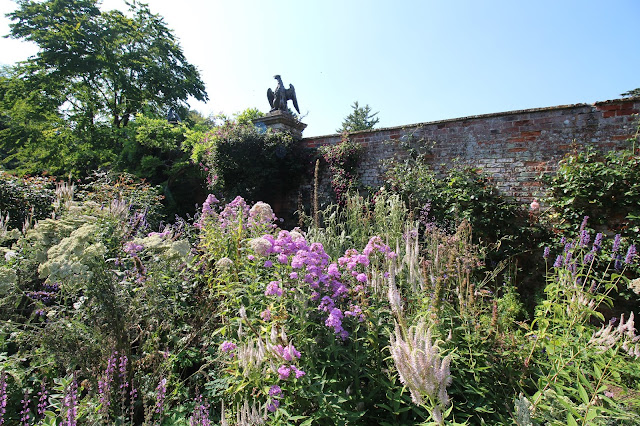 Roses are trained over tall frameworks.  The planting list for this border includes the David Austin roses The Generous Gardener and Mortimer Sackler. 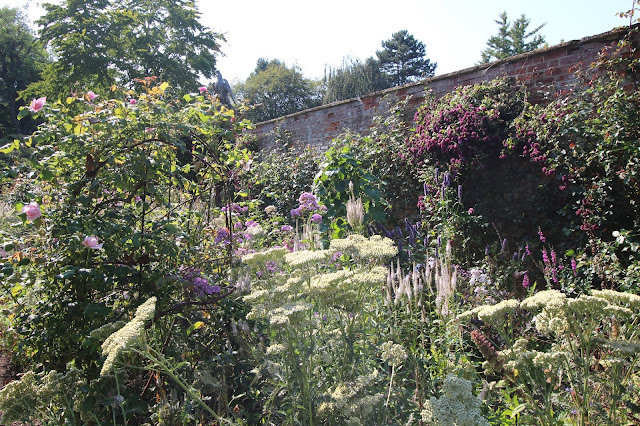 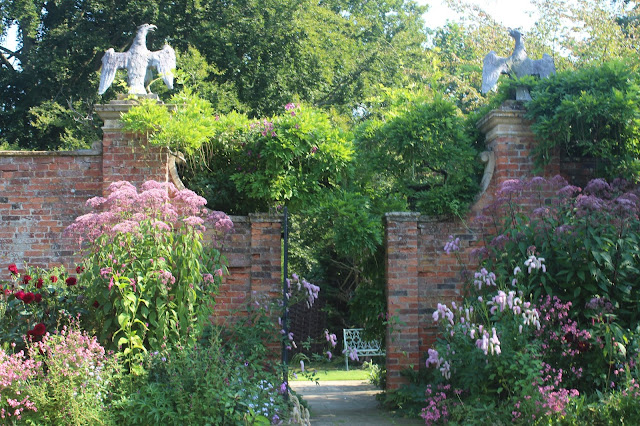 Similar soft planting leads to an area where platforms of copper beech have been planted.  These are something of an Arne Maynard signature.  They also appear around the central pool at Haddon Hall, which I visited earlier in July. 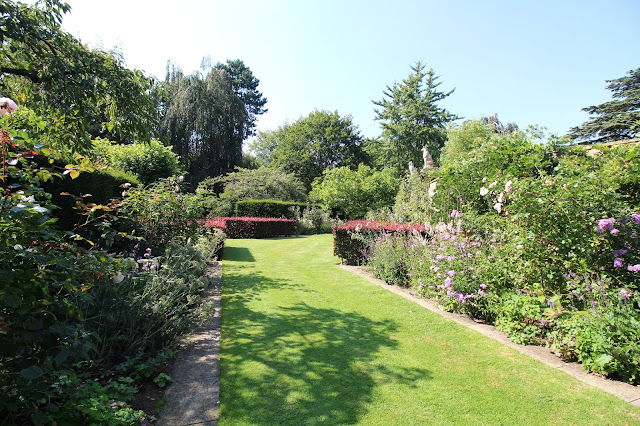 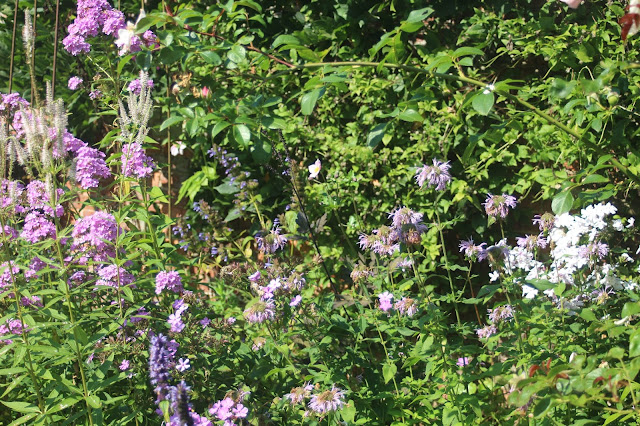 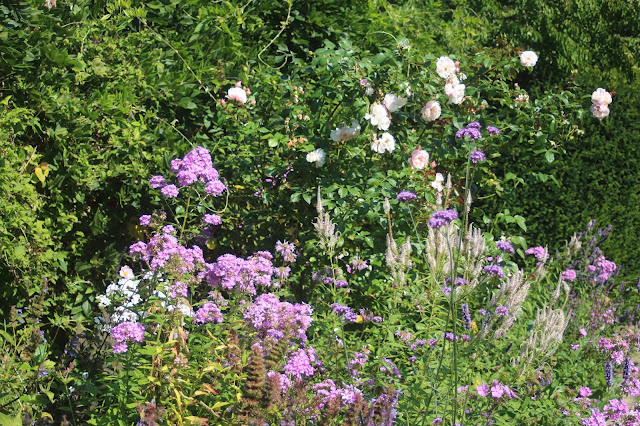 The Pool Garden was laid out by Dame Sylvia Crowe in the 1950s, but the planting in this area has also been designed recently by Arne Maynard. 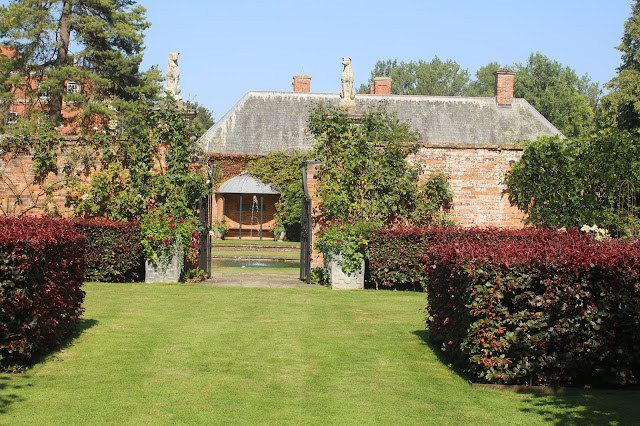 The purple beech L shaped hedges are also used inside this part of the garden.  Rich crimson and deep pinks are the dominant notes in the borders which are backed by the enclosing brick walls. 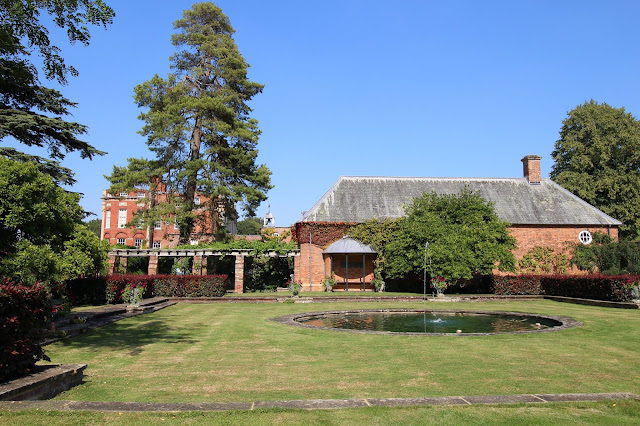 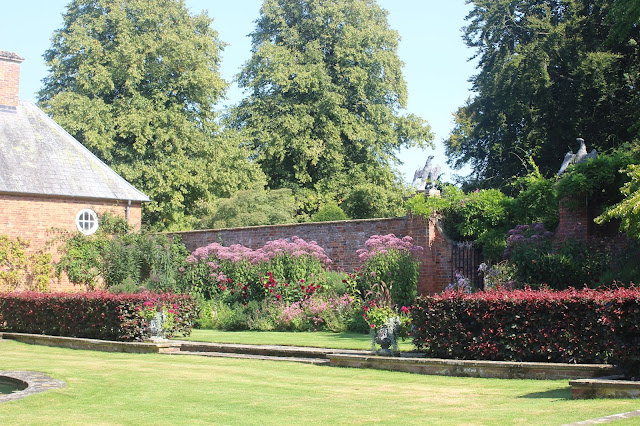 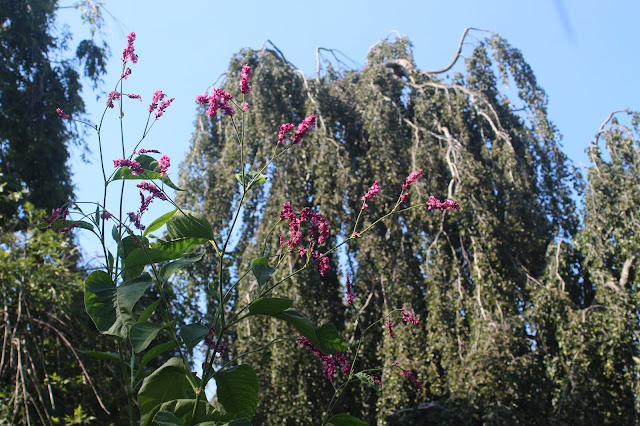 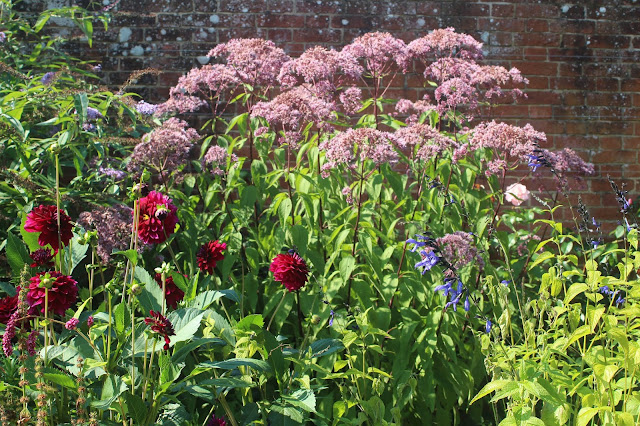 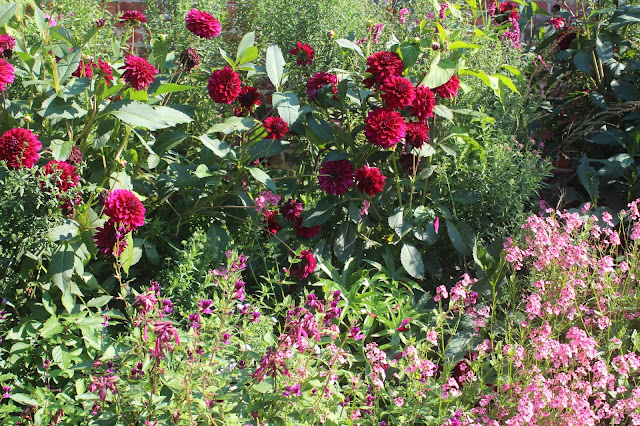 To one side of the pool garden is a shady Arts and Crafts pergola with a pair of cherubs decorating the far wall.  This garden has obviously been developed by many generations of keen garden owners. 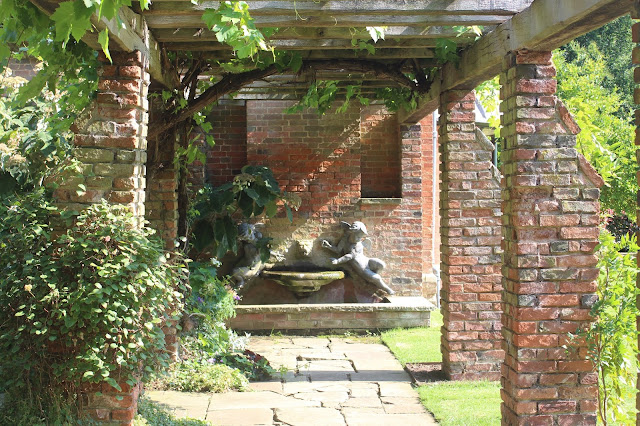 Beyond the pergola is the Dutch Garden.  This more intimate garden is tucked into a sheltered space next to the brick walls of the house.  Height is delivered by tall yew obelisks and a central sun dial.  Against the walls is one of my favourite plants, the Magnolia grandiflora. 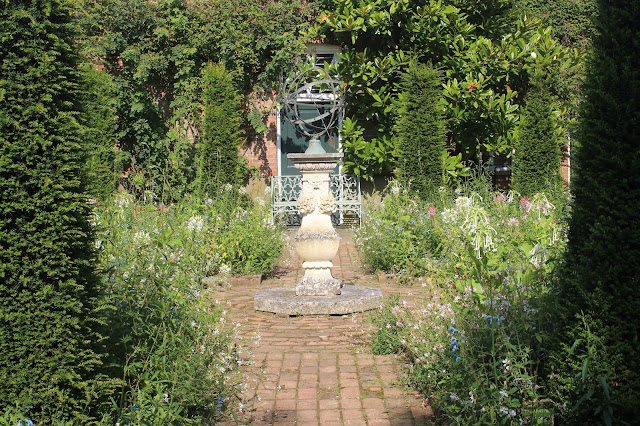 Also adjacent to the house is another formal pool, named the Monkey Pool after the statue situated among the water lilies.  Tubs of white Hydrangeas decorate the paving.  Steps lead up to Double Borders originally designed by James Alexander-Sinclair. 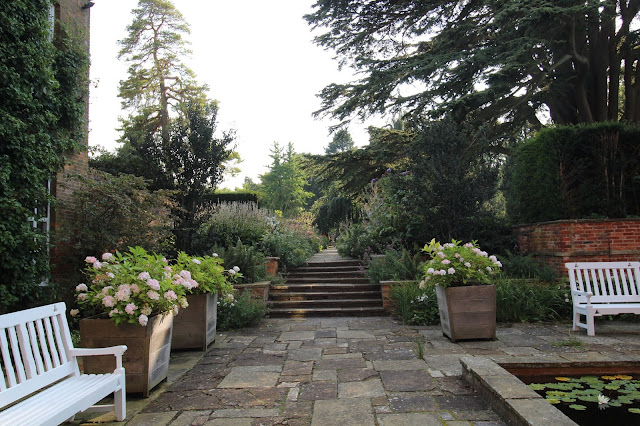 At the end of August, a lot of the plants here had already had their moment of glory, but there was still some things to catch the eye. 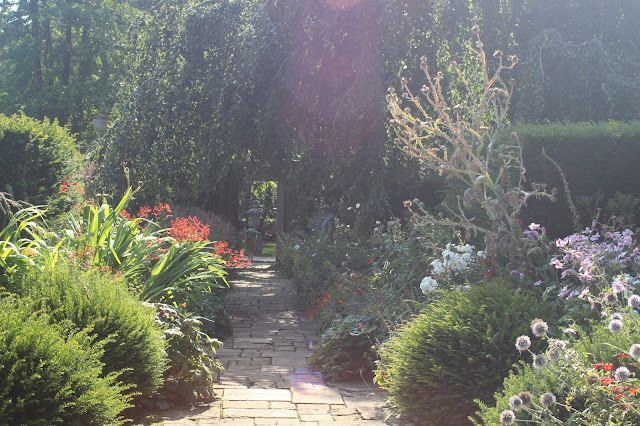 The view back towards the house is shown below. 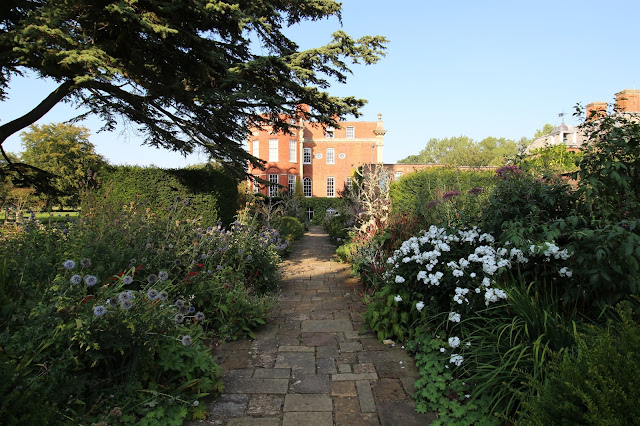 Clusters of topiary domes on stems form the corners of this gravel garden, with a black mirror pool forming the central focus.  The oval pool produces an interesting optical illusion, appearing perfectly circular from some viewpoints. 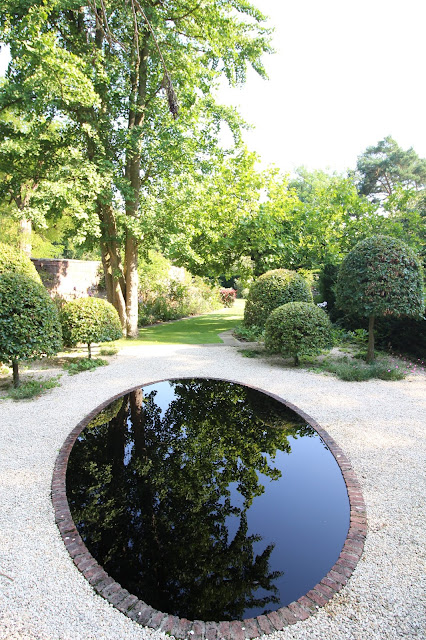 Down a short path across the park land is the Wild Garden, so there is plenty here to keep the visitor interested.  As large as the formal gardens we had already visited, this area winds down a bank to bridges which cross the stream. 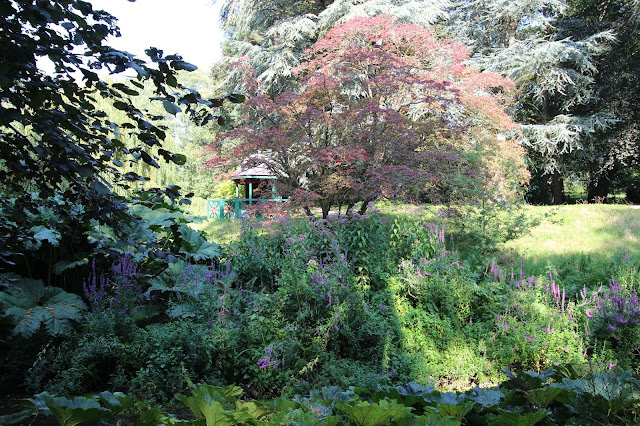 On such a hot day, it was a welcoming cool and shady walk. 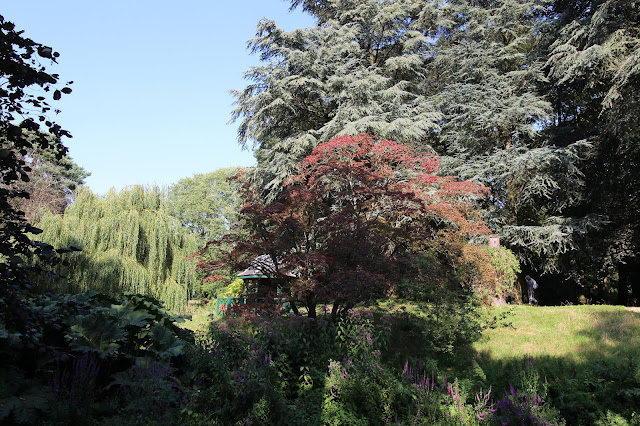 We had a final walk through the formal gardens before we made our way home. 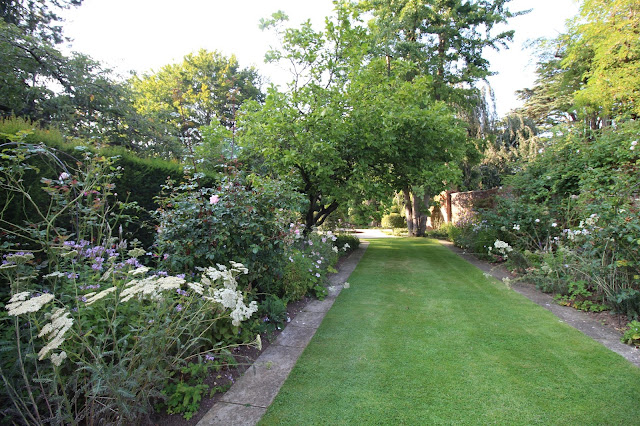