I'm an admirer of  Arne Maynard's garden designs and have poured over his book 'The Gardens of Arne Maynard' on many an evening.  I find it both enjoyable and inspiring to read about the creation of these beautiful places.  In the book, Arne highlights a few elements that are key to his gardens.  They include  two of my favourite things - roses and topiary.  I also greatly admire his use of colour.  I love his soft, romantic colour pallet of pale pinks and mauve with  deeper shades of purple. The photos in this book are excellent at capturing atmosphere, but what is impossible to convey is how the different spaces fit together and lead into one another.  I was therefore interested to see one of his gardens for myself.  He mostly works for private clients, but he has made gardens at Haddon Hall in the Peak District, which are open to the public.


Haddon Hall is a truly ancient place.  It dates from the twelfth to the seventeenth centuries and its gardens occupy terraces laid out in Elizabethan time.  From the eighteenth century until the early twentieth century the house was left unoccupied.  The Dukes of Rutland, to whom it belonged, had other properties where they lived, but Haddon Hall was preserved as a relic of another era of interest to antiquaries and historians. 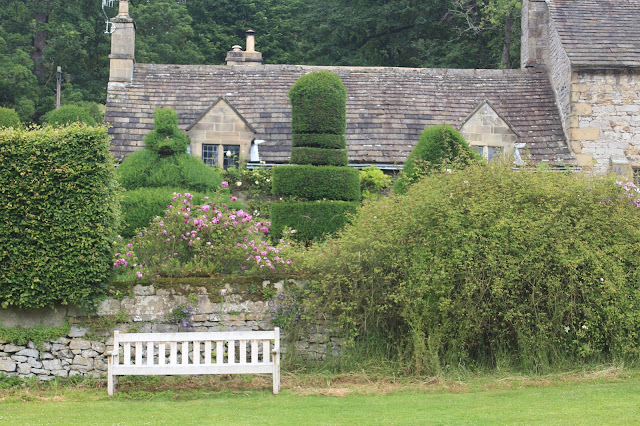 Before reaching the main entrance gate of the Hall, we had this glimpse of gigantic yew topiary emerging above the stone wall.  The sign on the garden gate announced that this was the Gardener's House and that the garden was private.  We had to content ourselves with this intriguing glimpse.

We walked on through the entrance courtyard and out into the  lower of the two garden terraces which Arne Maynard designed.  It has a square pool at its centre anchored by four L shaped pieces of copper beech topiary.  Roses in shades of pink and white are trained against the walls of the Hall, with borders of perennials below them in shades of pink, lavender, silver and plum. 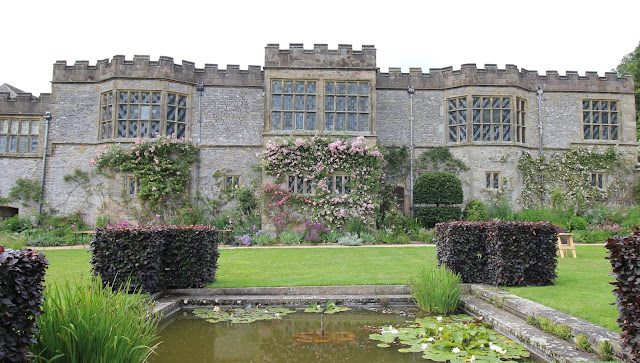 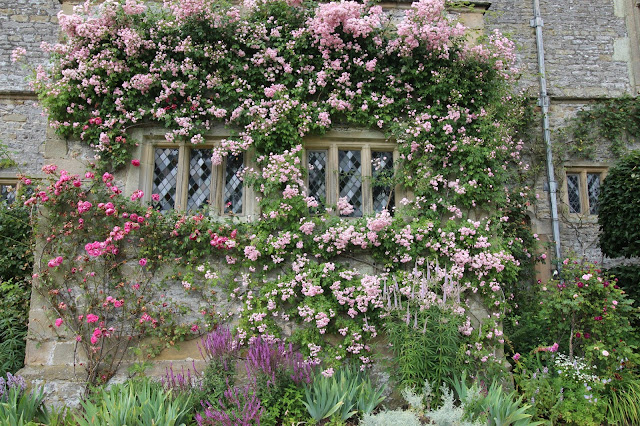 Here and there a piece of clipped topiary adds structure and height to the borders, but the roses are the stars of the show at this time of year.  Throughout the twentieth century, Haddon Hall's garden had been celebrated for its roses.  Arne edited the selection in situ, removing the harsher modern colours and increasing the amount of companion planting. 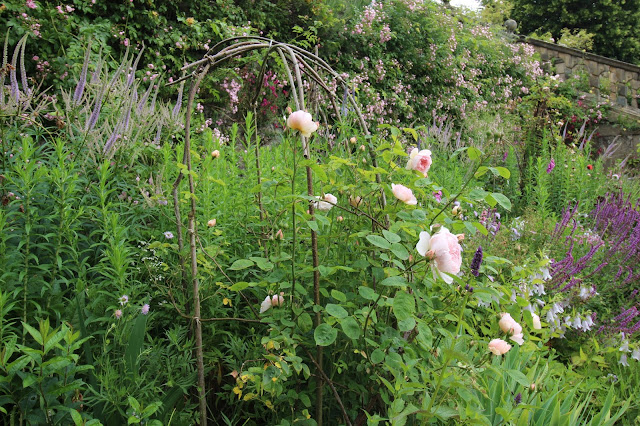 Some of the shrub roses are tied to wigwams of hazel or trained over domed shaped structures like this one.  In most cases the structure has become invisible as it is completely covered by the rose.  I took this picture of one which wasn't as an aid memoir for me as I have a rose which could do with something similar to support it. 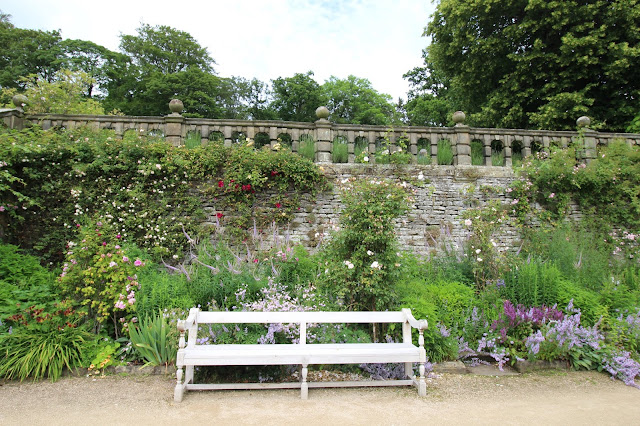 As we continued to walk around the perimeter of the lower terrace, we passed the retaining wall of the upper terrace, topped with its stone balustrade.  Below were handsome benches, which Arne based on some shown in old photos of the garden, and which were made by the estate carpenters. 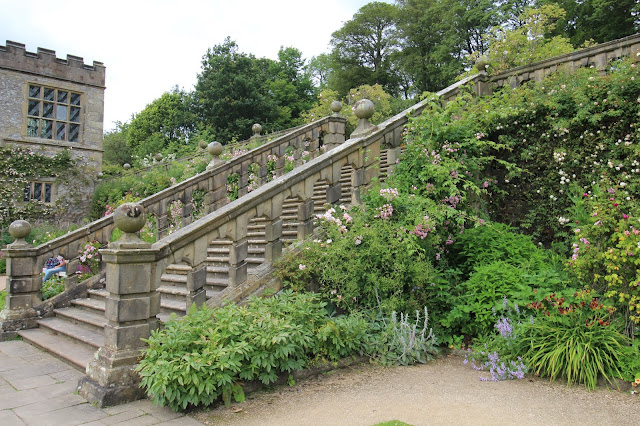 A stately stone staircase leads to the upper terrace from here, but we continued round the lower one. 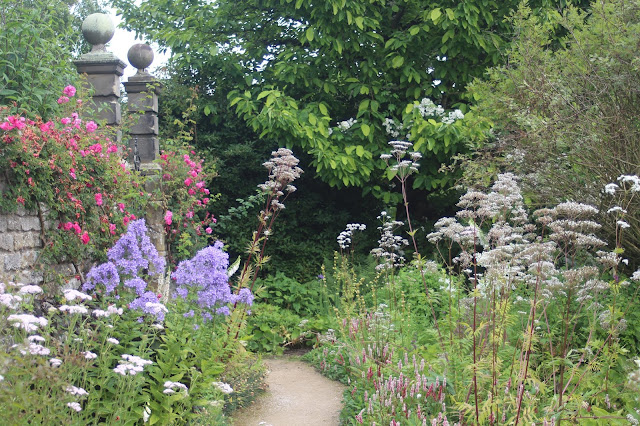 The path along the base of the retaining wall leads into an attractive shady corner, planted with hostas.  The gate posts terminate this path.  Beyond the locked gate is rough grass area.

Turning right along the third side of the lower terrace, the mood of the garden changes. 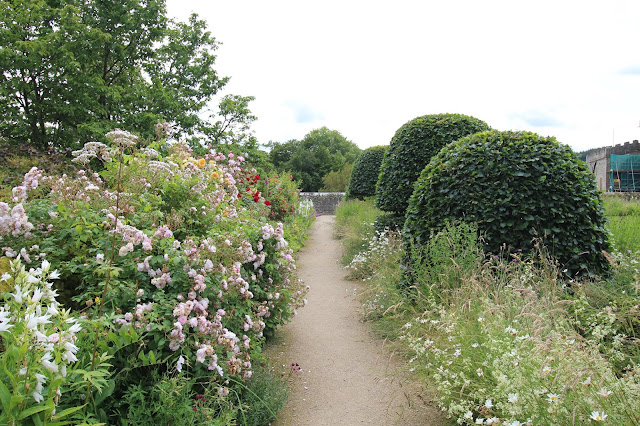 The walkway narrows and the space becomes more intimate.  To the left are more shrub roses backed by a low wall.  To the right majestic dome shaped topiary in beech and hornbeam arise from a border of foaming wild flowers.  Included are ox-eye daisies, foxgloves, valerian, sorrel and Campanula latifolia.  The wild softness and use of native flowers is totally suited to the other worldly atmosphere of this ancient building. 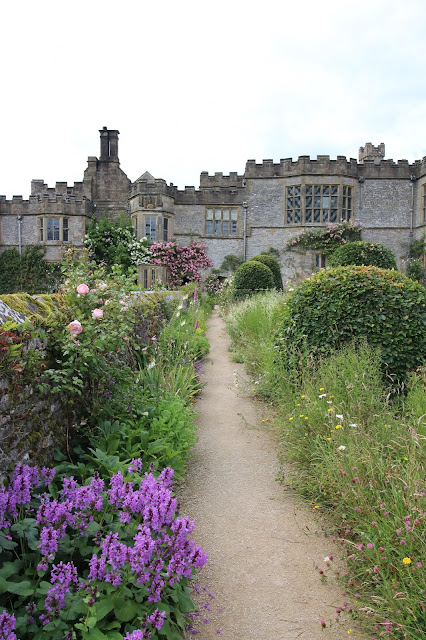 The path turns a right angle and we return back to the hall, alongside a further section of wildflower meadow.

We then climbed the stone steps to the upper terrace, which is divided into two areas.  There is a knot garden adjacent to the Hall, and the other main area is largely laid to lawn surrounded by topiary yews.   On the day we visited a wedding reception was being held on the main lawn, and what a beautiful back drop it made to their celebrations. 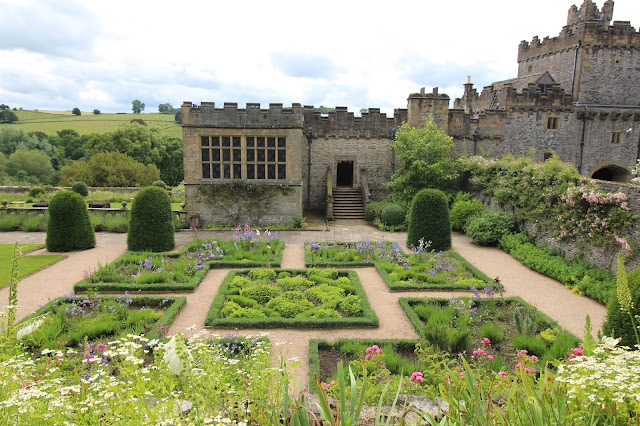 This is the knot garden that Arne designed, and not a box plant to be seen!  The darker green hedges framing the compartments are germander (Teucrium chamaedrys), with lavender 'Munstead' and rosemary outlining the inner knots.  Flowering plants are planted within the compartments formed by the dwarf hedges.  In his book Arne mentions sweet violets, Geum rivale and Iris germanica var. florentina; plants that were popular in the seventeenth century.  This was interesting to see because of the use of different plants for the knots.  I've read a few books on knot gardens, mainly written in the 1980's when there was a revival of them, but although the authors acknowledge that the Elizabethans used many different plants to make their knots, the recreations seem to have been made almost exclusively in box.  I think the use of gemander, lavender and rosemary has been very successful.  The design has remained clear; and it smells nicer than box. 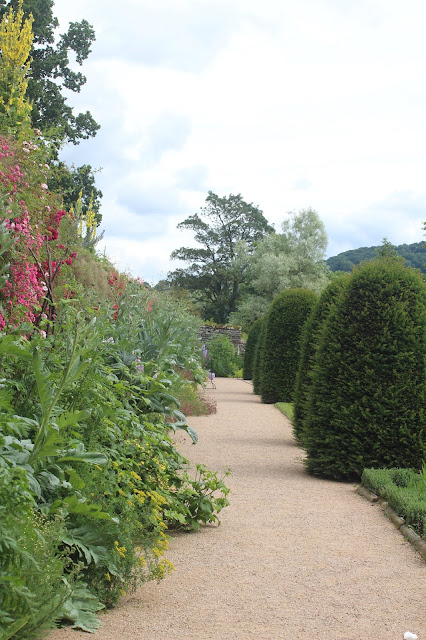 Flanking one side of the main lawn is the 'Dyeing Border' containing plants traditionally used to provide dyes.  Haddon Hall is famous for its tapestries which would have been woven using wool and silk coloured with dyes derived from these plants.

The tapestry collection was originally more extensive, but during the renovation of the Hall in the early twentieth century, a fire broke out which partially destroyed them - sadly an all too familiar tale.  The singed remains of some of them can be seen in the small museum in the courtyard of the Hall.