HORTUS ON TOUR IN DEVON

I've spent the last two days in Devon enjoying a few gardens there.  So this week's Six comes from three National Trust Properties - Knightshayes, A La Ronde and Killerton.

Knightshayes has a renowned 'Garden in the Wood' created in the mid 20th century within a 19th century Arboretum.   I'd been to this garden once before but not managed to see it at its Spring peak, so I fancied making a return visit.  I wasn't disappointed.  Paths wander through groves of Azaleas, Rhododendrons, Camellias and Magnolias. 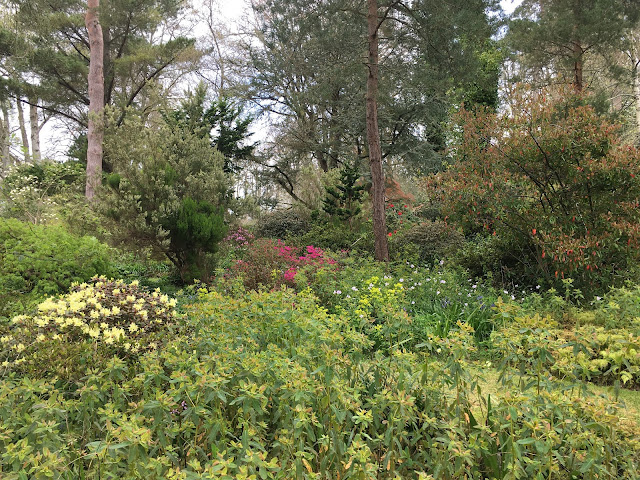 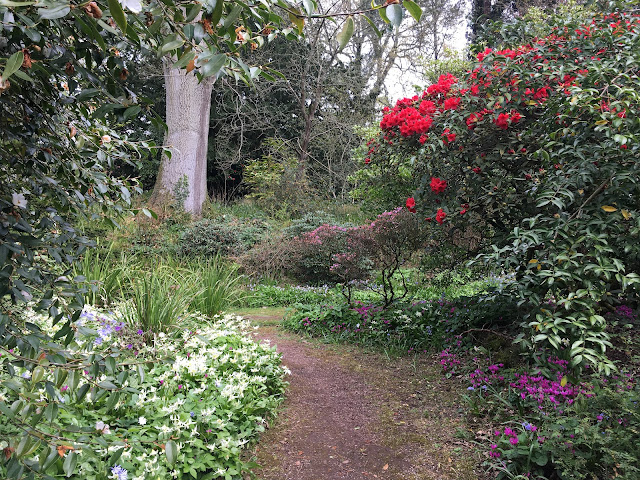 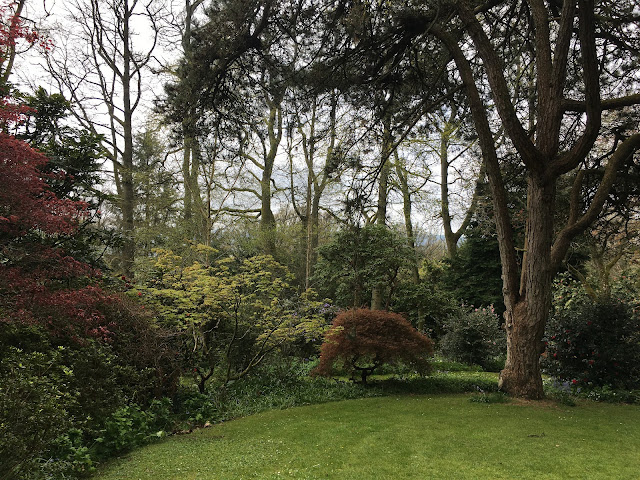 Under the shrubs, the ground is covered in a tapestry of woodland plants.  Here there are cyclamen and primroses.  Elsewhere anemones and bluebells and pulmonaria formed carpets of colour. 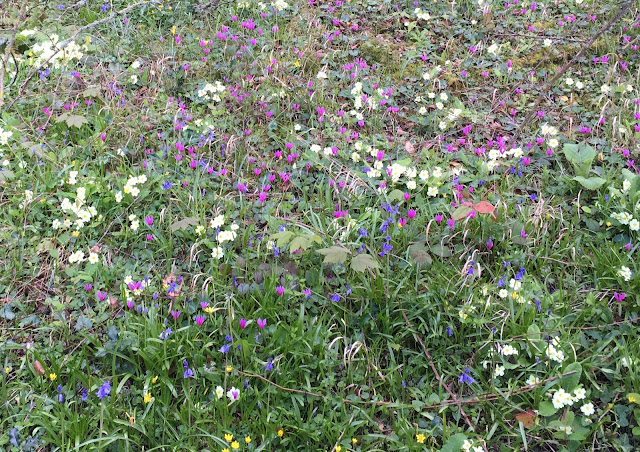 Knightshayes also has a 4 acre walled kitchen garden, which is supposed to be worth a visit.  The walls with their corner turrets were designed by William Burges, the architect of the main house (and Cardiff Castle) who liked a medieval flourish.  Actually 'liked' is an understatement.  He had a positive mania for a medieval flourish. 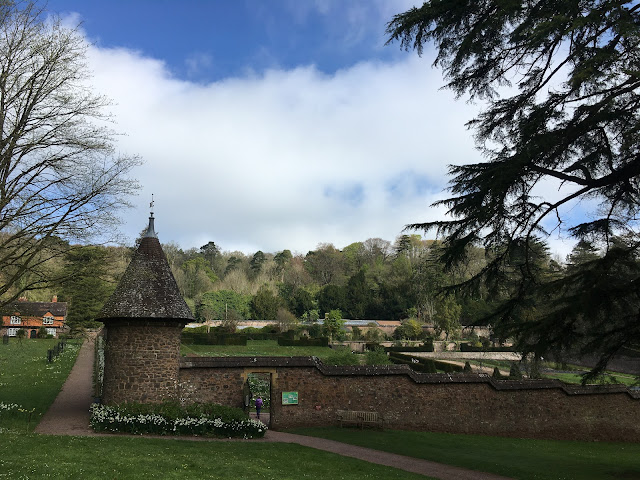 Within the walls the cutting garden was near the entrance gate, but apart from some broad beans and garlic there was mostly bare soil, weeds and weed supressing membrane.  There were no gardeners there to ask about its neglected state.  From talking to volunteers at other National Trust properties it seems that they hadn't been allowed to work in the gardens until this spring, which would give them a significant backlog of jobs. 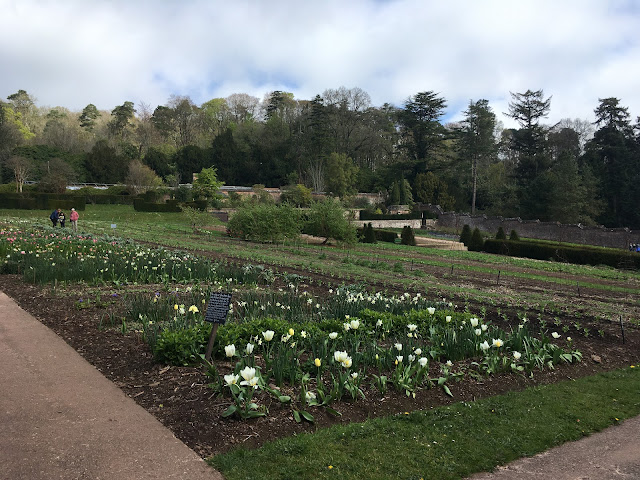 On to A La Ronde now, which was built by two cousins in the 18th Century as their home with Orchards and kitchen garden.  They also kept cows and chickens and probably more besides.  As the delightful lady, who gave us a tour of the grounds said, they must have kept all of Exeter in fresh produce.

The house is built to an almost circular plan with a central circular hall with wedge shaped rooms coming off it.  Each of them is decorated with feathers, cut out silhouettes and souvenirs of their travels.  The gallery above the hall is encrusted with shells, although it is covered over for restoration at present.  The house sits at the top of a sloping hay meadow with what must be wonderful views over the estuary on a clearer day.  Two monkey puzzle trees stand on the lawn, replacing the original specimens which had been some of the earliest ones in the UK, Araucaria araucaria having been first made available by the nearby Veitch's nursery. 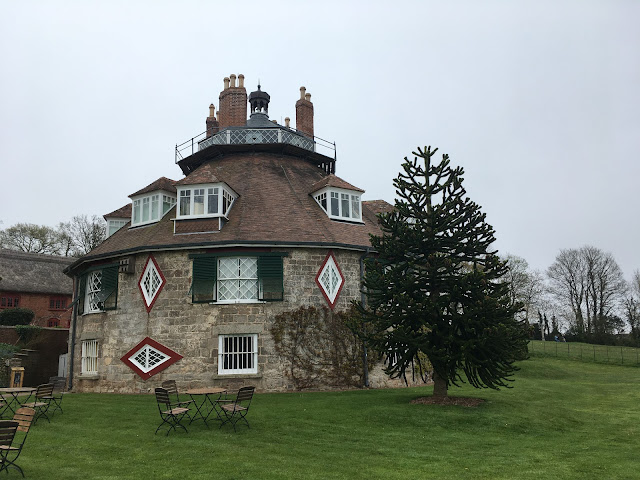 The Veitch family of nurserymen and horticulturalists had a significant influence in this area.  The founder of the dynasty John Veitch was head gardener at Killerton as well as designing other gardens and discovering and propagating new plants at his nursery nearby.

In the foreground of the first photograph is Magnolia veitchii 'Peter Vietch' with Magnolia soulangeana 'Bronozzii' covered in white flowers behind.  It's the later of these that I would love the find a space for at home. 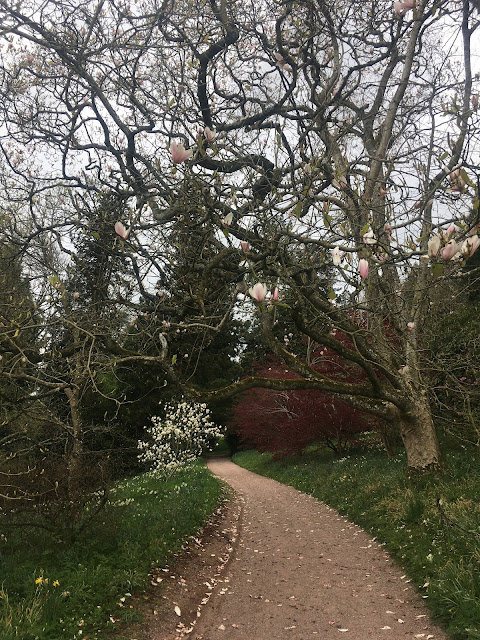 The next photo is of the very aptly named Magnolia soulangeana 'Picture' and isn't it just? 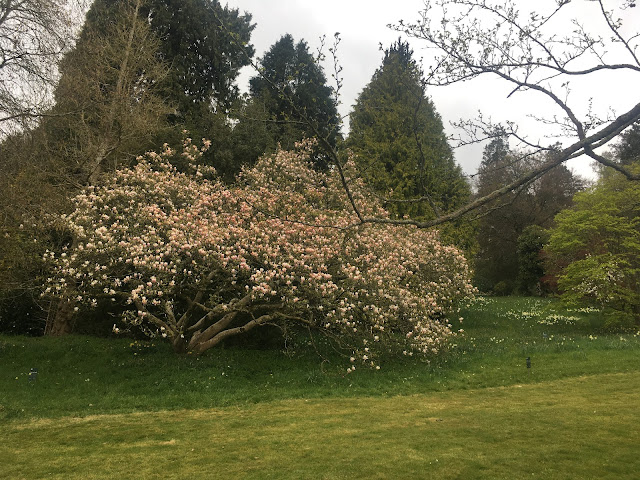 That's the end of my whistle stop tour of some Devon gardens.  It was supposed to be two photos per garden to make up the Six, but I got a bit carried away on the Knightshayes section so you'll have to forgive me.  See you next week, but in the meantime enjoy looking through the other links on the Propagator.