Yesterday the garden hung with mist all day.  When faced with all that cold and dank decay, who wouldn't dream of Italian Summer skies, baking pavements, the scent of woody herbs and maybe a column or two? Well, your wish is my command.  We will leave the dreary British Winter behind for now, and journey to warmer climes as we visit Iford Manor, near Bath, on an August afternoon.

I love this garden, and would have made it the subject of a Six on Saturday back in the Summer, if a voice hadn't whispered in my ear - 'save it for one of those Winter weeks when nothing is happening in your garden'.

Tiny bit of background info for those who are interested.  The garden was designed by Harold Peto, the Edwardian architect, for his own house  He believed that a good garden should have a perfect balance between architectural elements and planting.  So he collected original Italian sculptures from many periods and incorporated them in the loggias and terraces with which he decorated this hillside garden.

In recent years the garden had became a sleeping beauty, but a renewed enthusiasm for sharing it with visitors has meant it is open more often, the built elements have been restored and  the planting has received the ministrations of Troy Scot Smith no less, during a recent sabbatical from Sissinghurst.

The main axis of the garden runs along this formal terrace.  To the left the tree covered hillside climbs away.  To the right the colonnade frames views of the sloping grassy Georgian garden that was original to the house.

The standard wisteria in the left foreground is one of many in the garden.  The planting on the terrace was mainly in quiet purples and misty blues. 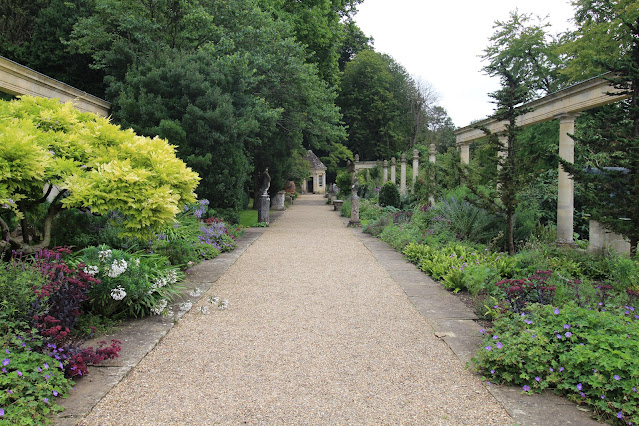 A little Georgian Summer house forms a focal point at the end of the terrace, which is ornamented with Roman sarcophagi and a copy of the bronze wolf with Romulus and Remus. 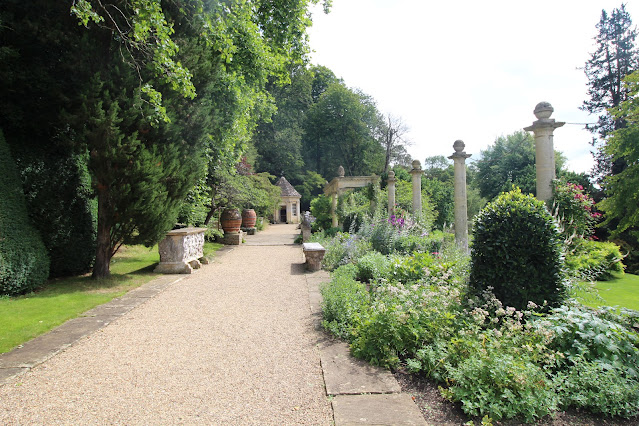 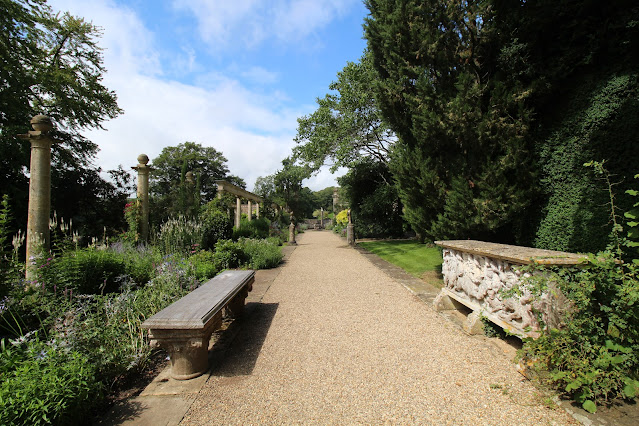 The view at the other end is framed by columns and a curved bench.  A Byzantine well head and Roman column fill the apse of this 'outdoor basilica'. 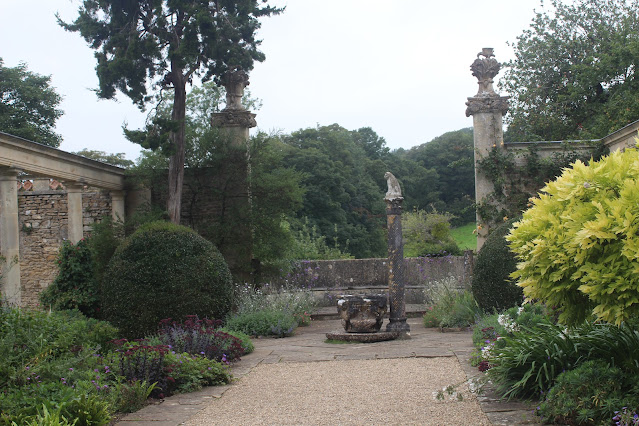 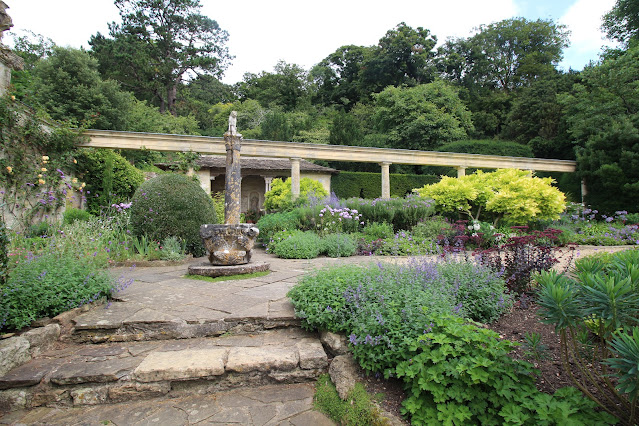 At this point I was wondering where a row of columns could be beneficially inserted into my own dear plot of earth.  (I fear it would not be possible).
So we ventured on exploring up this precipitous flight of stairs, which lead to a column dedicated to Edward VII, for his role as peacemaker.  In one of those charming tricks of perspective, the column, once reached, turns out to be situated on the other side of a country lane. 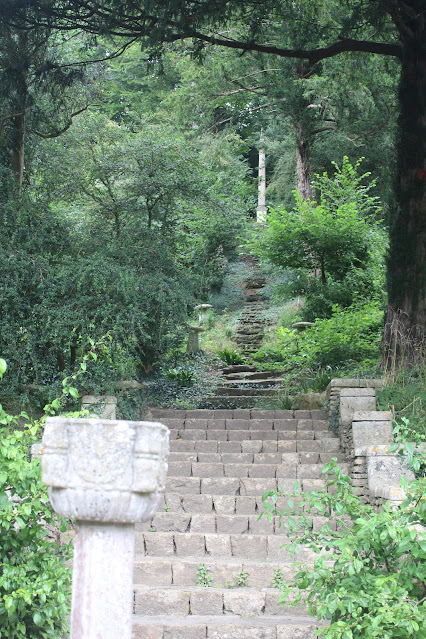 To the side of this woodland staircase is a Japanese garden, and despite knowing that the Edwardians had a penchant for them, it still comes as rather a surprise.  It is a little over grown and romantically shabby. 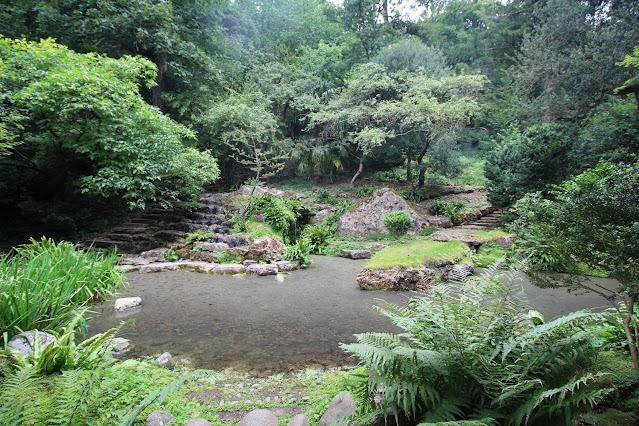 Returning to the main garden, it appears that Peto's architectural enthusiasm trumped his gardening one when he built The Cloisters in the Italian Romanesque style.  Thirteenth century lions guard the steps.  Some fine pots of Eucomis (Sparkling Burgundy I think) stand either side of the door.
(At last a plant name -  but not many more to come I'm afraid.  This is the problem of leaving the write up until the Winter.) 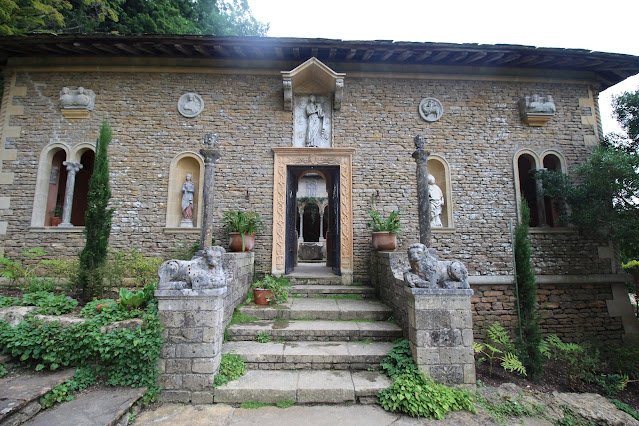 The building is decorated with many Byzantine panels.  The evocation of Italy is almost totally believable. The vision is only broken when looking out at the view from the balcony, you glance down, to find a garden path only a few feet below. 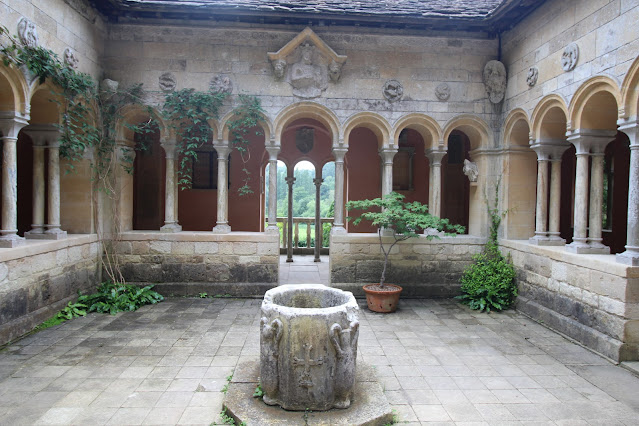 Back out into the warm sunshine, there is some new planting here (pencil Cyprus?), to try to tie this building back into the less formal Georgian garden. 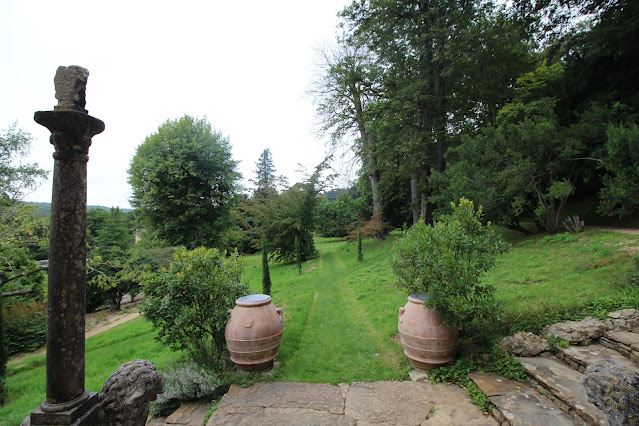 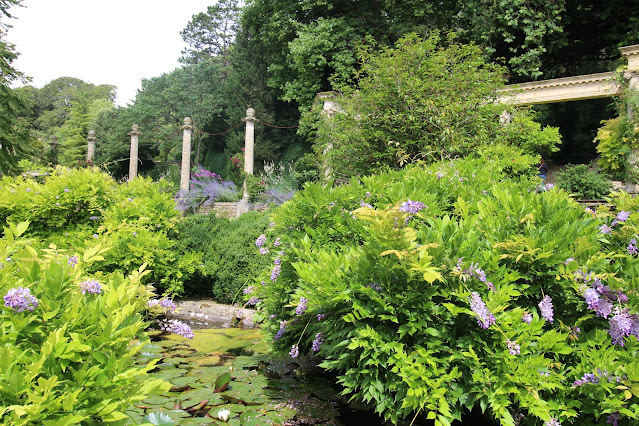 Hiding in amongst these huge wisteria is a lily pond.  Several gardeners were hard at work cutting back the wayward stems.  It was lovely to see it flowering in August.
The final spot to visit on this trip is this little paved courtyard, with its exotic display of tender plants in pots. Much use was made of pots in the garden, which added focal points and colour to what is quite a mature planting.  Scroll back up, and I expect you'll spot a few in the photographs.  Salvia Amistad was planted in some pots by the café, which inspired me to do the same with mine. 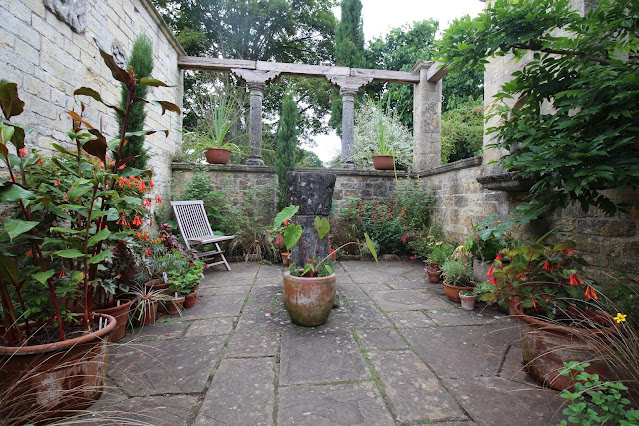 I'm afraid I did not count to six this week, as I wanted to cram in as much of this garden as I could.  I hope you have found it as inspiring as I have.
Thanks as always to the Propagator for hosting Six on Saturday.