If you've been out in your garden this week, you are either a) much hardier than me or b) live somewhere much warmer.  The most time I've spent out there was when I took the pictures for this weeks Six on Saturday.  I hope this news doesn't come as too much of a shock to you.  Perhaps you are muttering under your breath -'Well I call that very shabby' in the manner of Dame Maggie Smith complaining about bought marmalade.

This weeks selection is loosely based on the theme of 'Gift's', and the first one I have for you is this Helleborus Niger 'Christmas Carol', which I was given to me by my Mum and Dad. It's such a dainty little thing, with a big ruff of stamens in the centre.  The deep dusky green foliage is very handsome too.  It has spent the last few days in a cool room, where I can admire it, but it will be put outside, where I'm sure it would prefer to be, this weekend. 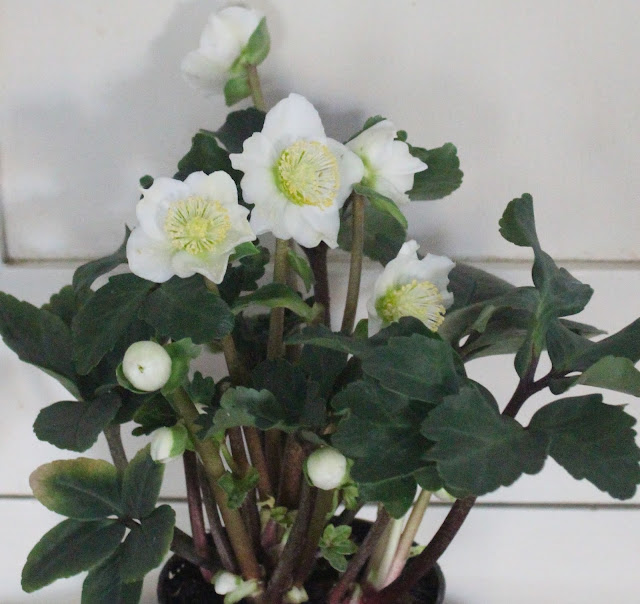 This next gift was given by Mr B, who thought these box pyramids looked very smart  They have been beautifully clipped.  Being a bit afraid of the dreaded box blight, I suggested that these spend a little time quarantining away from the other box plants. 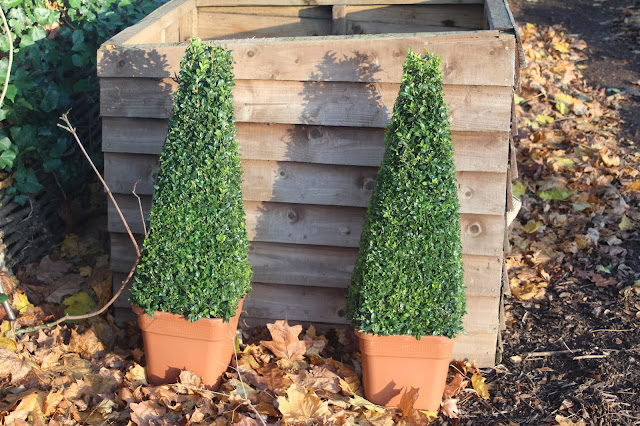 I'm not sure how long that should be?

On to 'gifts of nature' now.  Rain and sun are obviously essential to the garden, but compost perhaps makes it into third place.  Mr B has constructed this special corner.  Initially the motive was primarily somewhere to dump all the grass clippings, and in the first year some remarkable putrid sludge was produced.  A few years later, and just look at us now! Two bins at the near end store cardboard and other 'dry browns', followed by three open bays along which the compost makes its journey to achieve enlightenment at the far end. 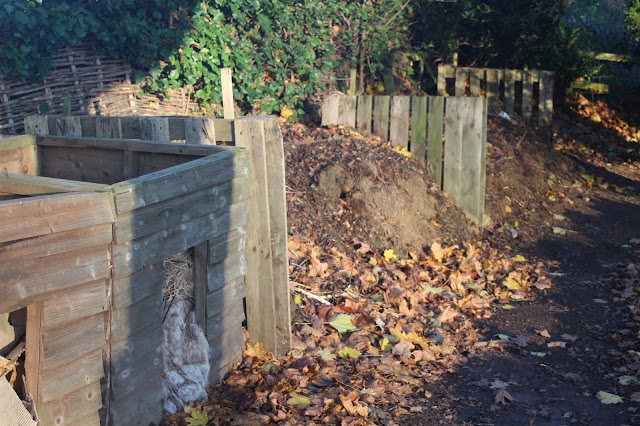 We all know that the path to enlightenment is slow and cannot be rushed.
This photo shows the end result, ready to be spread around the vegetable garden and borders in the Spring. 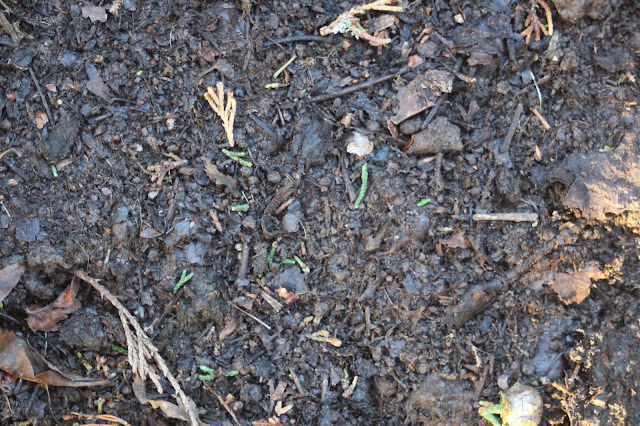 The next gift is another floral one from my parents garden.  It is a very pretty pale pink Hesperantha aka Schizostylis.  Unfortunately the wind and rain had not been kind to it, which is why you are seeing a photo of a sprig indoors rather than the whole plant. 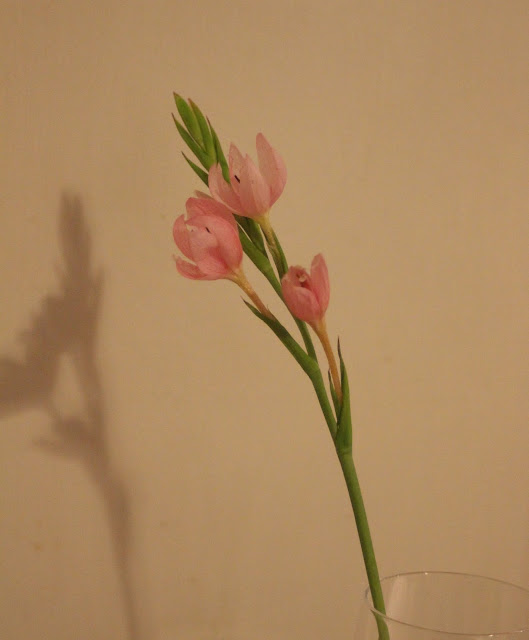 More gifts of nature next - leaf mould.  Mr B has gathered up the leaves.  The job is a large one. 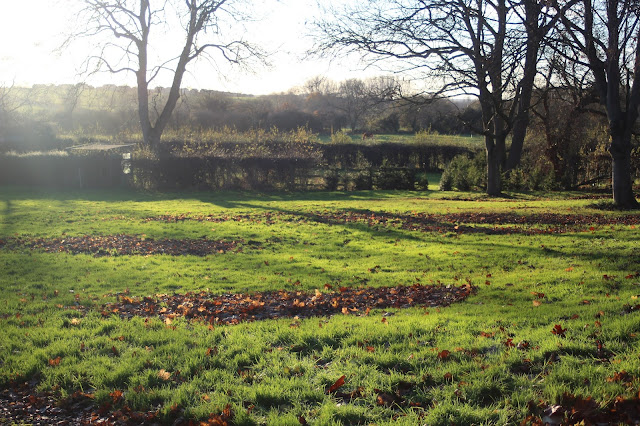 This leaf cage was constructed last year, using some old fencing, up by the compost bins.  I use the resulting leaf mould in a mix with garden soil and compost to fill pots, but also as a mulch in the garden over the top of the stickiest bits of clay.  The downside is that there seem to be a fair few weed seeds in it (mainly stinging nettles) but the upside is that any weeds can be pulled up very easily. 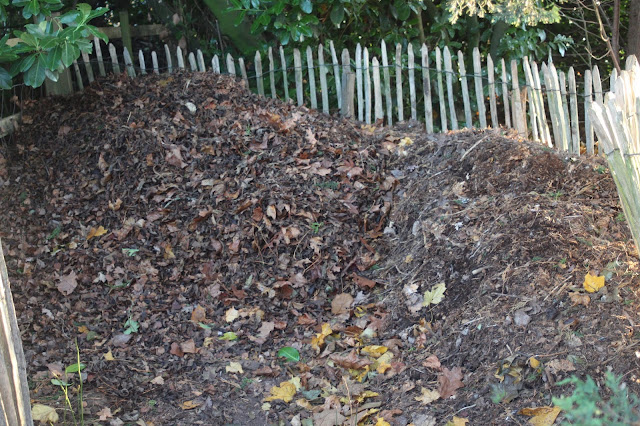 My final choice may not strictly fulfill the gift theme, but I thought it was good colour combination.  At the bottom of the picture are the dark red leaves of the Cotoneaster, and in the upper section the silver grey Phlomis fruticosa lean out over it. 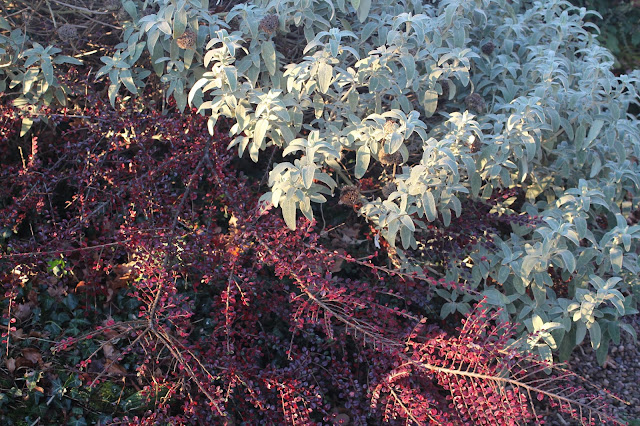 That's all from my garden this week.  There is plenty more to see on the Propagator, who kindly hosts Six on Saturday.
Labels: Garden diary