There's been some very welcome rain at the start of this week, and a lovely sunny evening and lunchtime or two.  Looking back over my posts from last September I see we were still enjoying some properly hot days, so I'm keeping my fingers crossed that Summer isn't on the way out yet.

The Sedum flowers have begun to open and like magic, the bees have congregated to collect their fill.  Although the Sedums will later darken to a rich burgundy, at the moment they are a delightful soft pink. 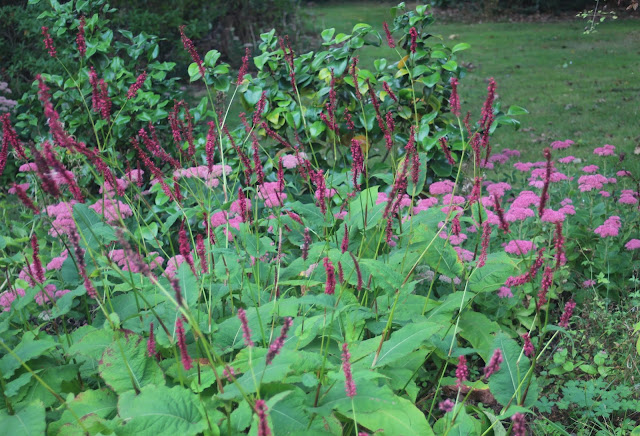 Despite being smothered in bees I appear to lack the patience to capture a good photograph of them. 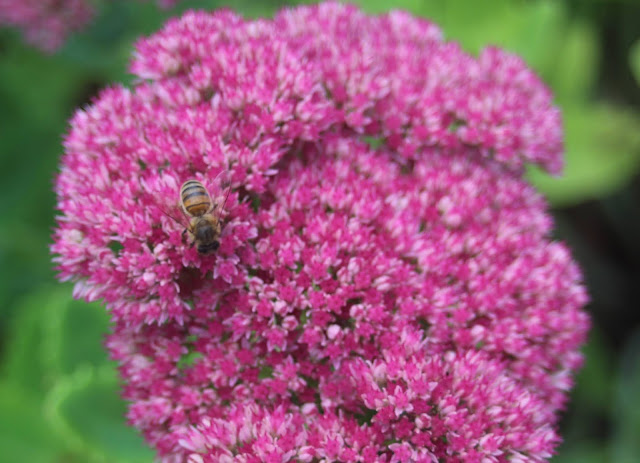 I like the combination with the Persicaria and Rosa Burgundy Ice.  The geraniums and astrantia have been cut back leaving the borders a bit bare, so the Sedums give some much needed substance. 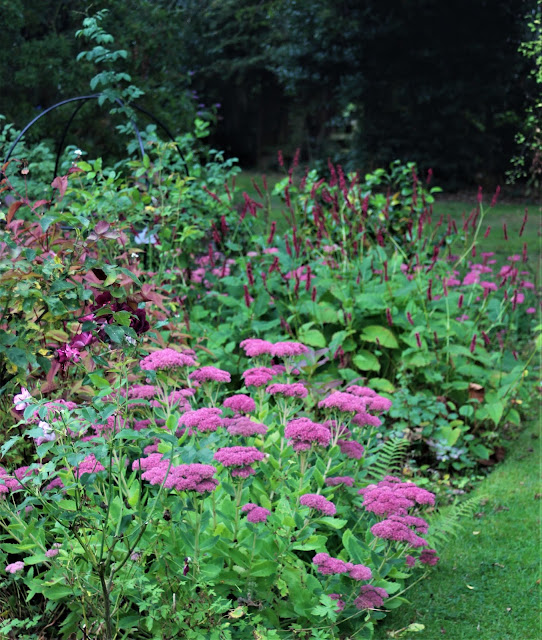 They are also keeping company with these fuchsia.  The sedums were all propagated from the one that was in the garden when we moved here, so I don't know the name of the variety (although I do know they are no longer called Sedums). 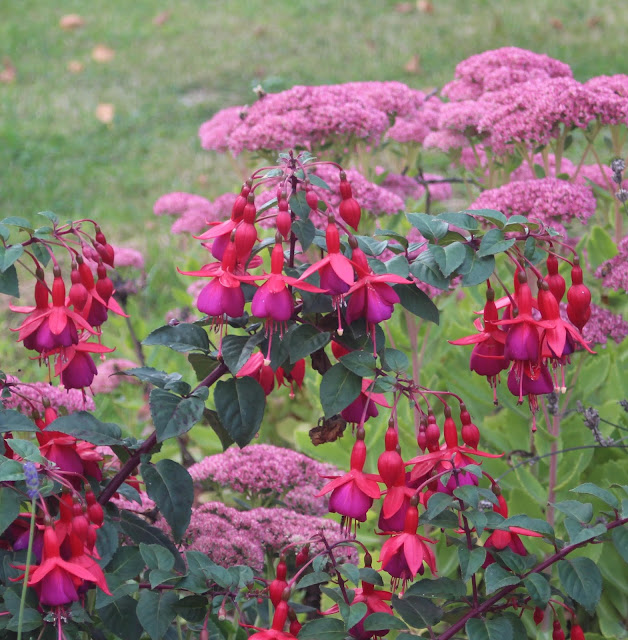 This Hydrangea is planted in the woodland garden under the trees, where I hoped they would do well.  Unfortunately it is really far too dry for them, so they haven't grown very much. Alas and and alack; not everything goes according to plan!  Of the large quantities of autumn flowering cyclamen I planted, not one has appeared.  I hope they are just biding their time.

There is a little apple tree which was in the garden when we arrived.  The apples don't keep, but the pink tinged flesh is very tasty. 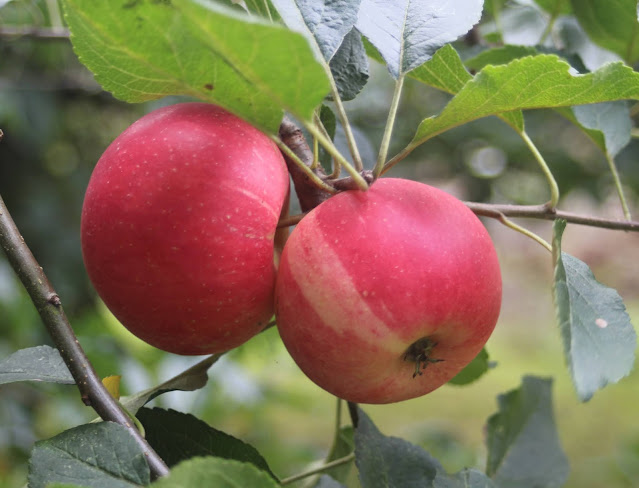 Last week the Nostalgic Gardener reminded me that I hadn't featured this Rudbeckia, although it's been appearing in the background of other photographs for weeks, so in terms of longevity in flower it's a good one.  It also likes heavy clay! 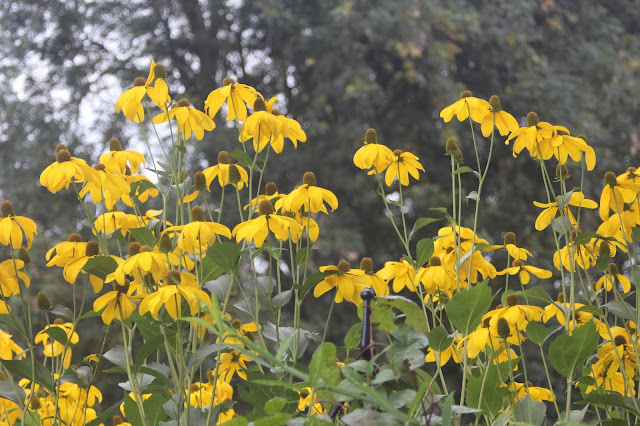 It's the tallest perennial in the border and while it doesn't normally flop, the heavy rain at the start of this week has meant it now leans backwards a bit. 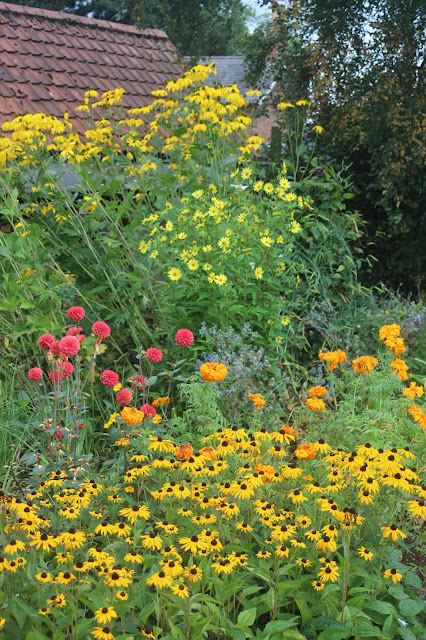 The peppers have done really well and have more fruit per plant than last year.  The seed was from Kings Seeds, and while a few of the early fruit rotted (weather and slug damage I suspect), they have now realised what they are supposed to do and have ripened properly.
As a bonus there is one with a comedy nose/tongue. 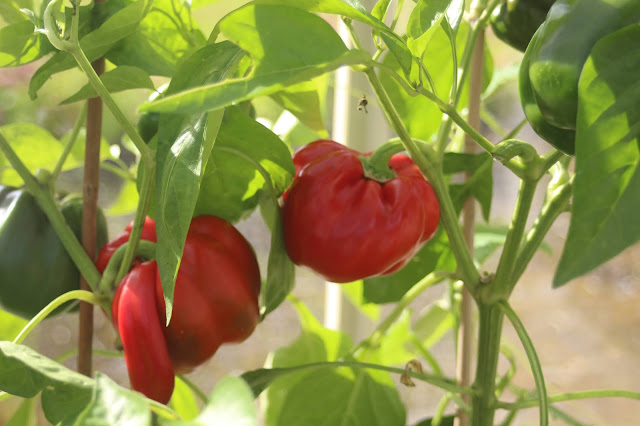 I'm not sure why this plant has taken to lolling on the ground.  The one I have in a pot is standing upright, but these seem to find that just too tiring,  It will be plant supports all round next year, mark my words. 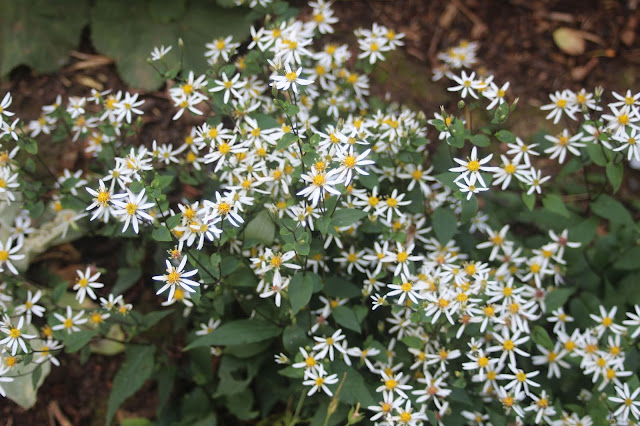 Last week I made the mistake of saying that the garden was looking nice and tidy.  Of course, it then rained at the start of this week and the weeds seemed to pop up overnight.  That will keep me busy this weekend.  When I'm not weeding I will be reading the Propagator, who hosts Six on Saturday, and find out what is happening in other gardens in the UK and further away.
Labels: Garden diary The Long Border The Rose Garden The Woodland Garden