THE START OF AUGUST IN THE GARDEN

We've had some good gardening weather this week.  Not too hot and not too wet, but just right.  Time to do a little tidying up; cutting back the old foliage and propping up any floppers.  It's mostly Long Border action this week, but before we get onto that lets stop and admire this dainty lass.

Love-in-a-mist is a pretty name for a pretty flower.  I have a nostalgic love for these flowers which I can't quite place.  Perhaps they grew in a childhood garden?  I strew a few seeds of these around many years ago and they pop up each year in the same spot.  I can't claim they have much impact as a group of plants, but get up close and they are fascinating. 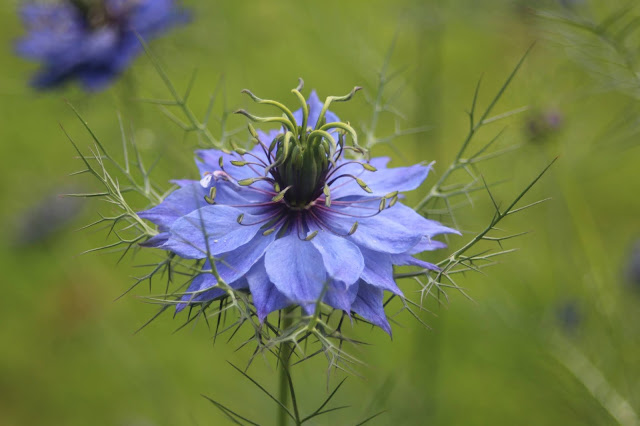 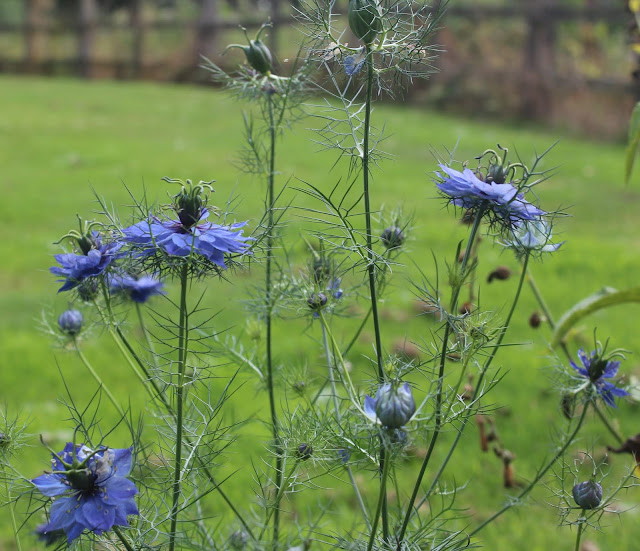 The Long border is going to feature heavily this week.  This is my favourite view of it, looking along the border and seeing the colours change from cool to hot and back again.  The border is based on the designs of Gertrude Jekyll who had just such a border at Munstead Wood.  Hers though was longer than this one.  I had room for only two thirds of the design.
This is a view along the border, which is interrupted half way along by an old Summer house. 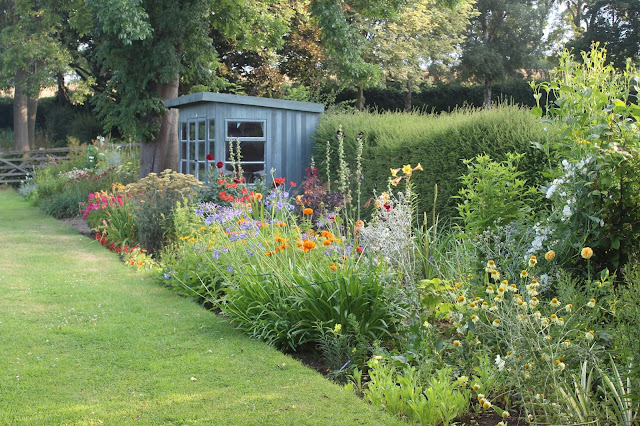 This white Sweet Pea is a perennial plant, that takes its time getting going each Spring.  It tries to convince me it's dead or being munched by slugs, but then suddenly romps away to climb and scramble over whatever it can reach.  Sadly it isn't scented. 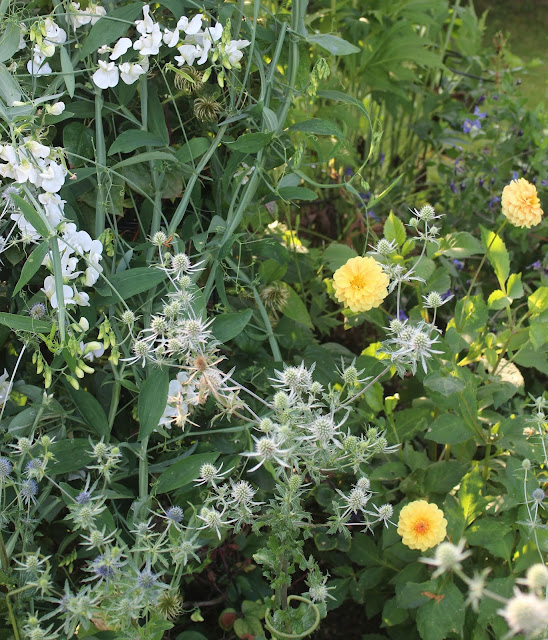 I think I had a fifty per cent success rate with these bulbs, but they are back for a second year which is good.  They are super tall.  You can see them poking their heads above the rest of the border about two thirds of the way along in picture 2. 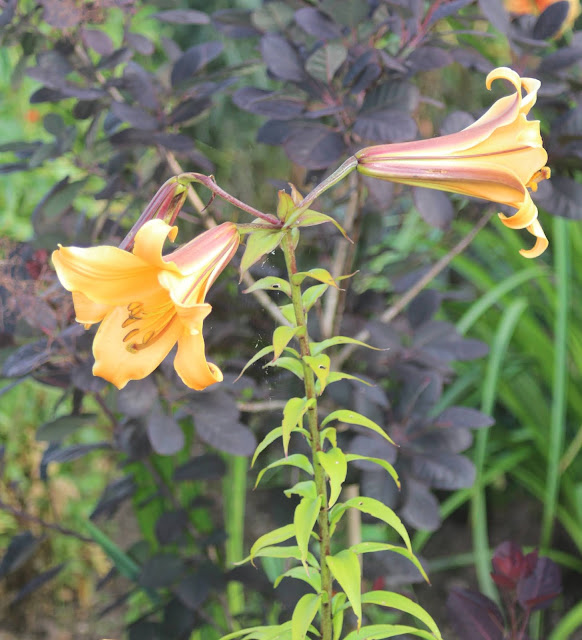 These don't feature in Gertrude's Long Border plans, but I got the plants as one of those freebees when you place an order and there was a bit of gap at the 'pink' end of the border.  They are one of those plants whose flowers seem to fold their petals back when it's night.  This photo was taken quite early in the morning and they are just starting to perk up. 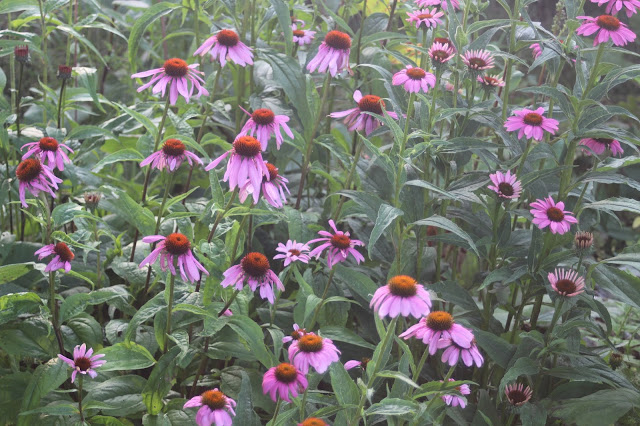 I wanted to take a series of photos showing the Long Border in its entirety; just as a record of what's done well. or not, this year.

The sun was just coming up as I took this shot of the start of the border, where the striped leaves of Iris  pallida variegata mingle with Anthemis tinctoria EC Buxton.  Past the tall group of Rudbeckia laciniata, which is still in bud, are the Agapanthus and Marigolds featured last week.

Moving along the border, the colours heat up.  Starting on the left with Crocosmia 'Lucifer' (also not on Getrude's original plan), Salvias, Nasturiums and Begonias front the border.  The hollyhocks are just finishing as the Dahlias start to flower.  I direct planted the tubers this year rather than potting them up and growing them on the in the greenhouse.  So far the results have been a little disappointing, but they may catch up later in the season.

Beyond the Summer House, the red Monarda lead into cooler colours again.  The spires of Mulleins and foxgloves stand at the back of the border while the leaves of Bergenia are looking robust and healthy at the front.  Next to them are a clump of day lilies which have barely flowered at all and need replacing with something else.

The final section of the border continues with the pale yellows and whites of the section above, before changing to pinks and blues at its finish.  The blues are mainly provided by the foliage of Iris pallida 'Argentea Variegata', Rue and some blue fescue.

I did a lot of digging up and moving in this border in the Spring and in combination with a decent amount of rain this year, it's filled out well.  There's always room for improvement though.
I've used up my six with proper gardening talk, but perhaps there is space for one more photo.  Do you remember 'Little Bear' who was going to help me with pest control in the garden?  It seems he feels his skill set tends more towards pruning the fuchsias. 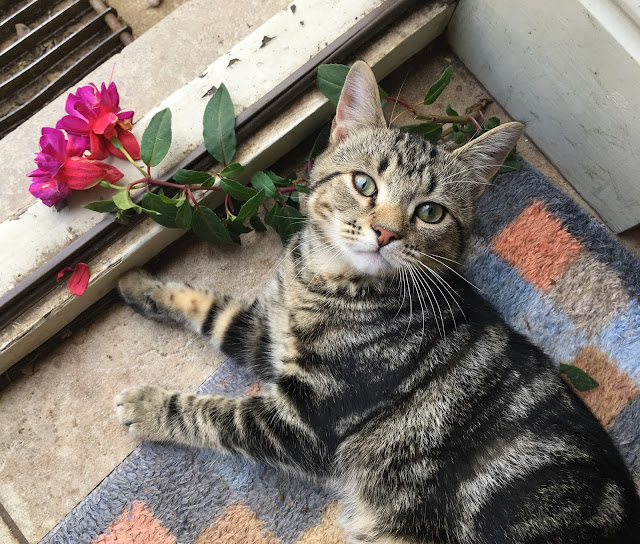 Thanks as always to the the Propagator for hosting Six on Saturday come rain or shine.