BUSY IN THE GARDEN - SIX ON SATURDAY

There are very few flowers still hanging on in the garden.  This astrantia was a self sown seedling I moved in the summer which I think then delayed it flowering until now.

I thought it would make a pretty start to this weeks Six on Saturday - that's six things whether they are a plant, a job, a creature or anything else happening in the garden this week.  Six on Saturday is kindly hosted by The Propagator. 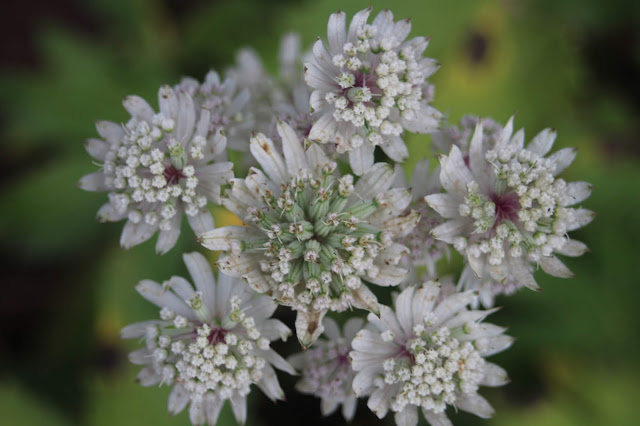 Regular readers of this blog know that I've been trying to clear out the ivy and other undergrowth from this small area of woodland.  We laid a bark path through here about seven years ago.  The bark came in plastic bags and we used them as underlay under the bark.  By now though, the bark has mostly composted down and the plastic bags have gone curly round the edges and peak out.  It was time for a revamp. 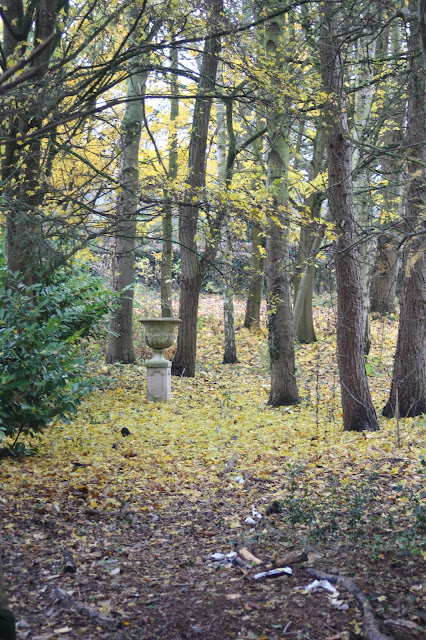 We lifted and saved the bark and put down some proper underlay which being dark hopefully won't show as much.  Some new bark chippings were used to finish off the path. 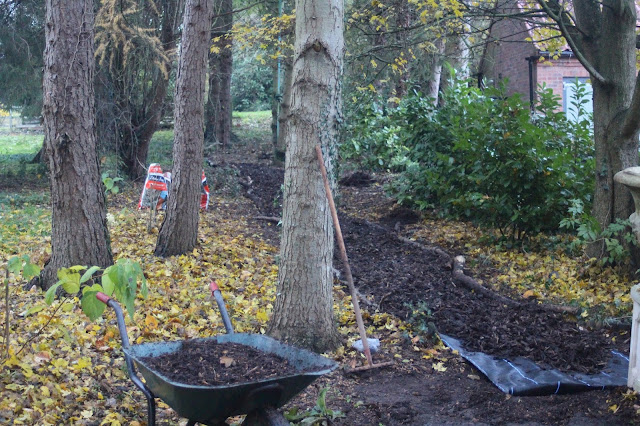 I've left the seed heads on the Eryngium alpinium but I do need to cut them down soon because they will seed around and I'll have to weed them all out.  If you want to remind yourself of how lovely these looked in August the link is here. 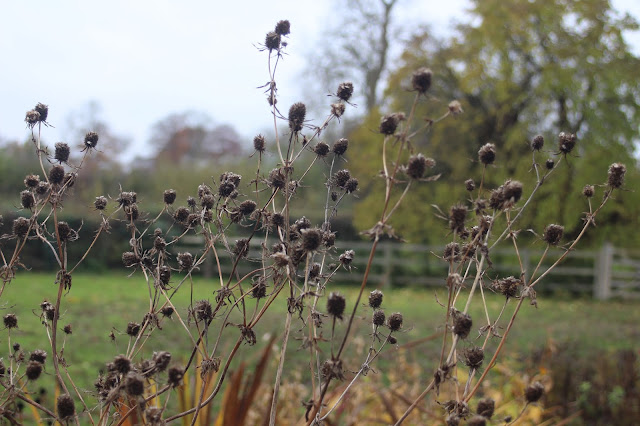 The other seed head that I photographed is Agapanthus, which will also seed itself a little, but not enough to be a nuisance. 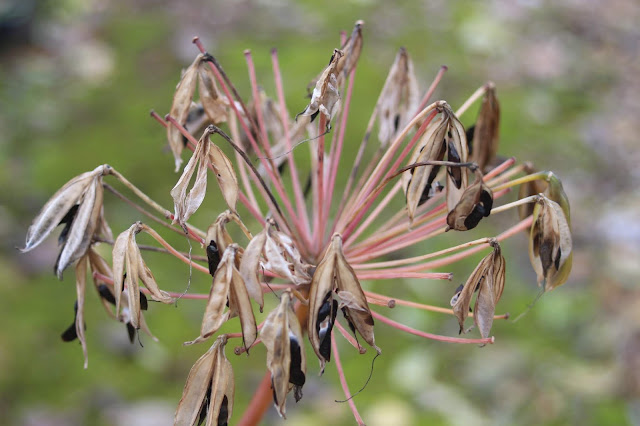 The pots outside the back door needed refreshing.  I've replaced the summer bedding with some Cyclamen, Pansies and Euonymus. 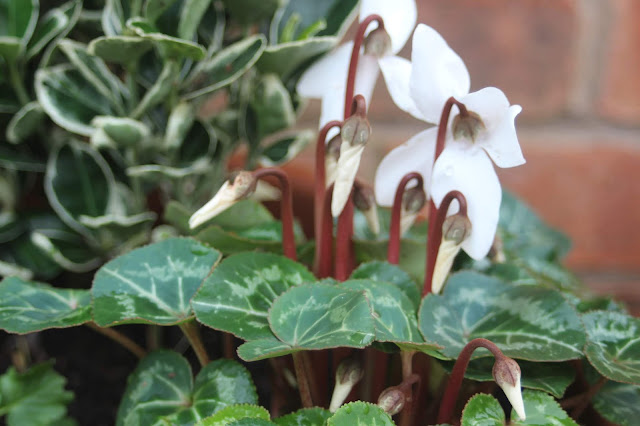 Any plants that I can over winter have been saved and moved to the greenhouse to be used next year. This fuchsia was one of them.  I've been intending to include it in my Six on Saturday before now because of its name.  It's called Winston Churchill and I cannot think of a flower that seems less redolent of him than this frou frou number. 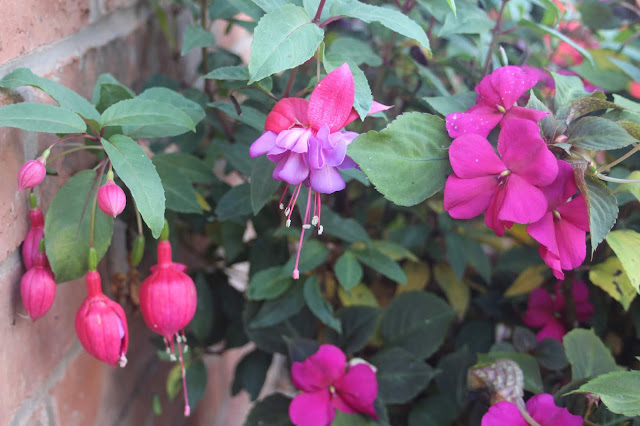 When I cut down the hollyhocks after they had finished flowering they had set seed.  It seemed such a waste to bin them so I sowed some and voila - here they are. 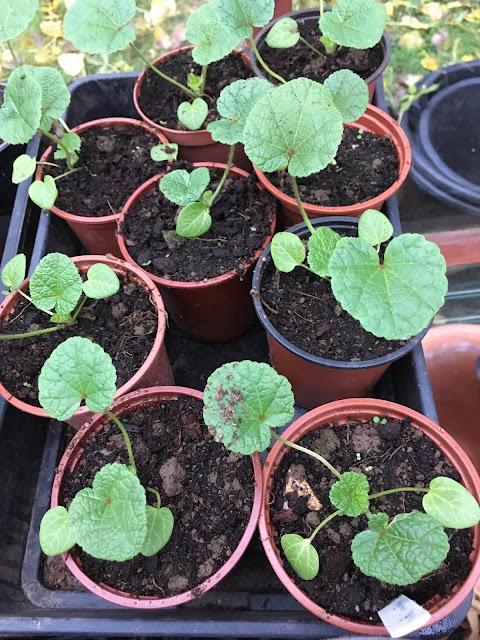 Last Sunday when it was sunny, this beautiful butterfly came to warm itself outside the potting shed.  I looked it up and I believe it is a Peacock butterfly. Luckily it wanted to hang around and I had time to fetch the camera to take some photos. 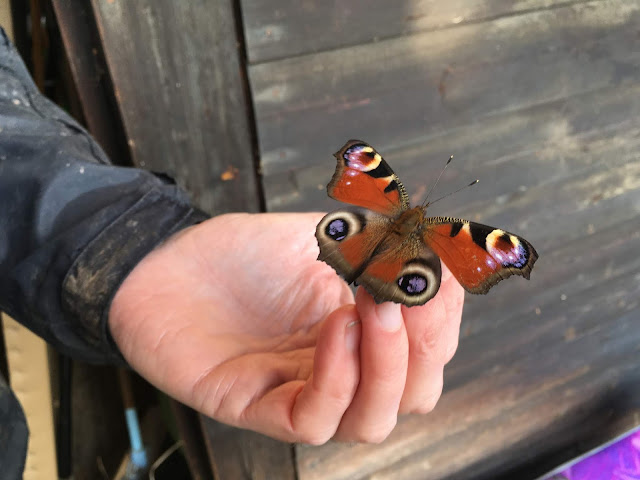