1. So my first six this week is some photos I took of the stunning asters in the gardens at Norwell Nurseries near Newark, which I visited so that I could remedy the lack of asters in my garden.  Sadly rather heavy rain meant our visit was rather shorter than I would have liked. 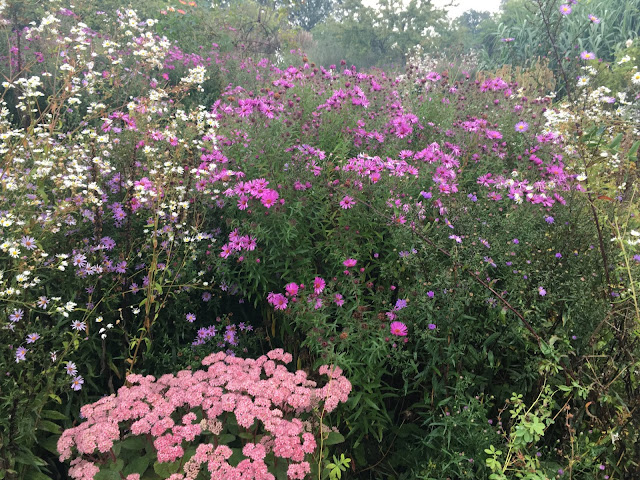 There were some stunning borders, containing some stunning asters.  Some varieties were a good 5-6ft tall.  I think I understand now why they don't appear much in the local garden centres.  You need space for these beauties.   Their lower stems are bare and they are top heavy so they don't sit well on the standard display bench. But seeing them in the display gardens showed how lovely they would look at the back of a border. 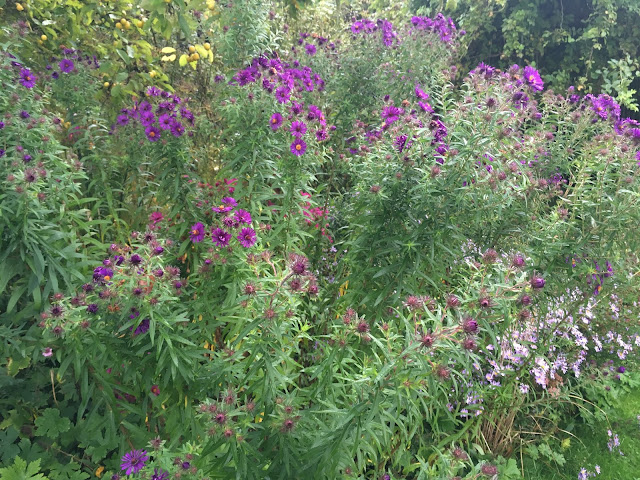 There was also a natural pond.  The yellow flowers on the far side of the pond are a tall helenium. The aster borders run behind the bench. 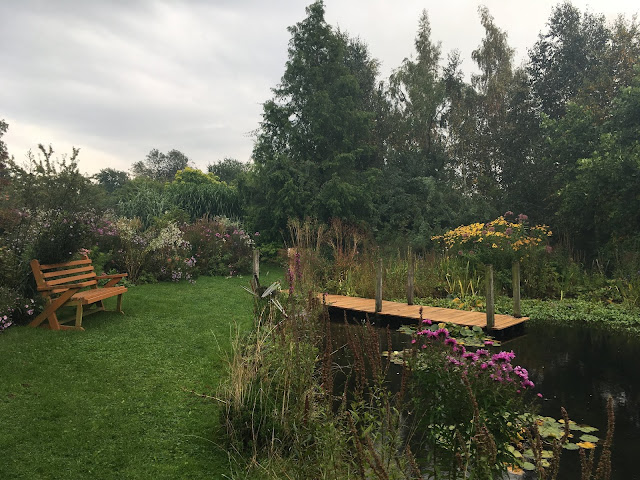 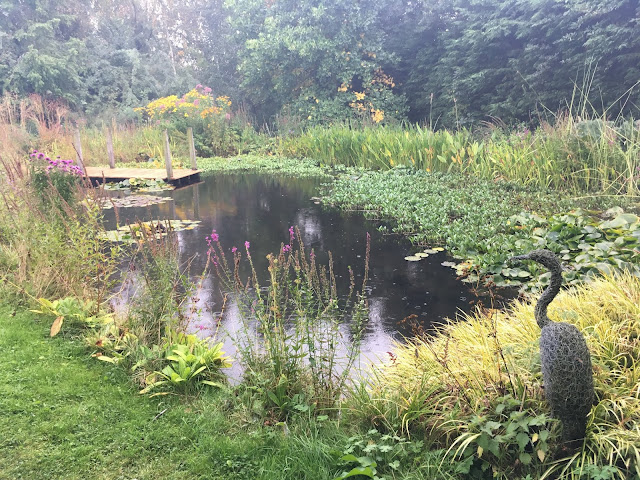 2. Aster n.a. Dark Desire growing in my garden. This is one of the asters I chose.   It's a striking dark purple  (its the one in the second photo of Norwell Nurseries).  It was in bud when I bought it so I've been waiting patiently for it to open so that it could feature in my Six on Saturday.  It was bred by Norwell Nurseries.  It is one of the very tall varieties, so I've planted it at the back of the rose beds. 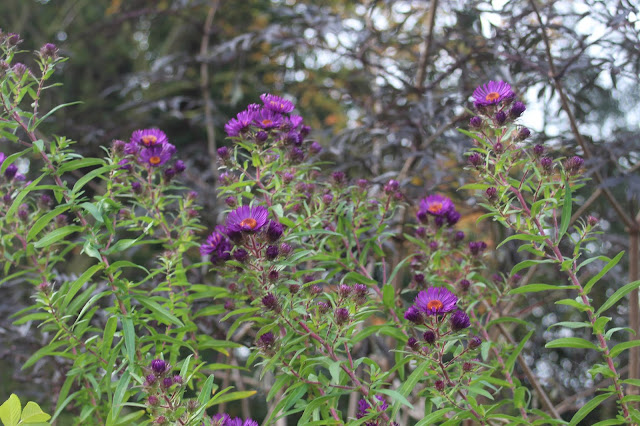 3. Lady in Blue is the aster that I already had in the garden, which did come from a regular garden centre a few years ago.  It's been flowering for a little while and the colour has faded to a slightly paler shade than before.  It's a small dainty plant about 1ft tall so more for the front of the border.  It needs moving to somewhere better and I'll have a go a propagating too. 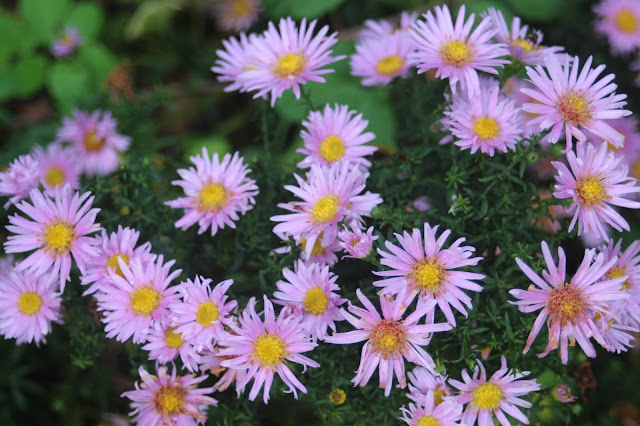 4. Aster Neron is the other aster that came home with me from Norwell.  It's of a medium height with shocking pink flowers.  It's still in it's pot while I look for the best spot for it.  It's found a temporary home by these sedums. 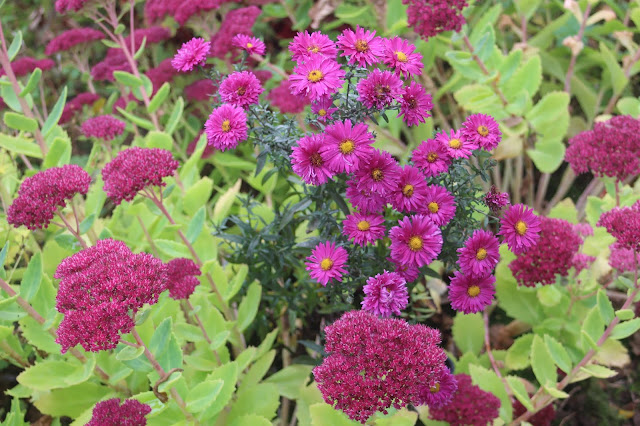 5. The harvest basket contains some swiss chard, nearly the last of the courgettes, some beetroot, a handful of purple beans and some green tomatoes.  I thought the beans had all finished, but the purple ones have had a final flourish.  The tomatoes will go in a drawer to finish ripening. 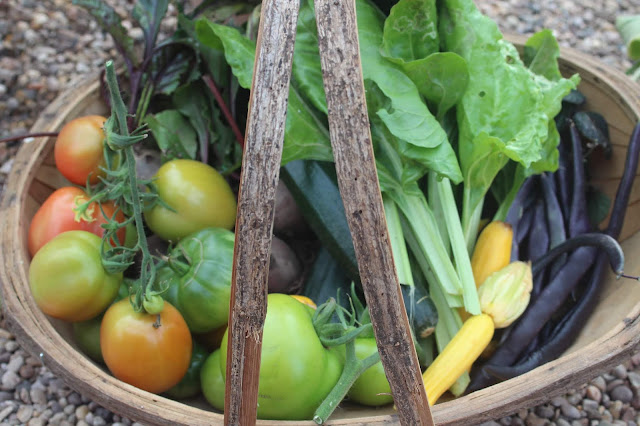 6.  The recent rain has turned our heavy clay soil to wet sticky mud.  It makes weeding hard work, and there has been a lot of it to do.  Most of this week has been spent weeding, and whilst it is very satisfying to see freshly turned earth where there was a patch of weeds, it does not make for interesting pictures.  Luckily this little fellow popped up from his hole to have his picture taken.  And he was a very small chap - to give you some sense of his size, the leaves next to him are box leaves. 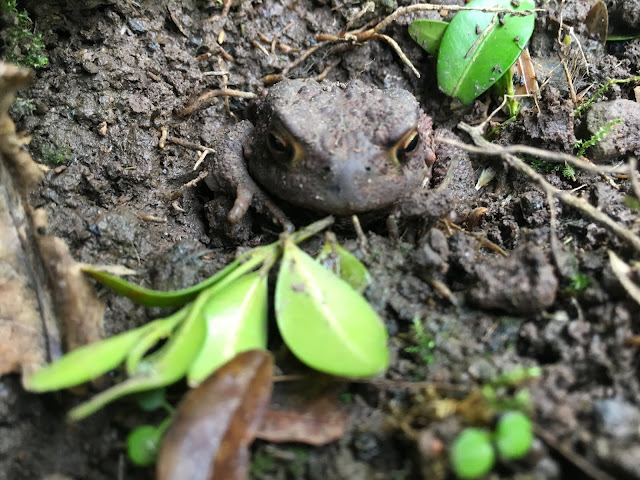 That's all for this week, but you can find more interesting gardens on The Propagator who kindly hosts Six on Saturday featuring news from gardens around the world.
Labels: Garden diary