I've noticed that some of my favourite garden blogs join in a kind of on-line show and tell session called Six on Saturday.  The idea is to write and post photos of six things, in the garden, on a Saturday.  'It could be anything - a flower, a water feature, wildlife, weeds, a plan, a job done, a harvest, anything at all.'

It's hosted by The Propagator  a garden blogger who particularly enjoys raising plants from seeds and cuttings but who writes about all aspects of their garden.

My first six on Saturday are plants that have just come into flower this week.  They are 'hot' flowers, in reds, oranges and yellows.

3. Crocosmia Lucifer is one of the best known Crocosmia, and its easy to see why.  It's a stunning vibrant red.  This plant was not included by Gertrude Jekyll in her Long Border, and I assume its because it wasn't available back then.  I've used it instead of Gladiolus brenchleyensis which is now quite difficult to get hold of.  There is an article on the Hestercombe Garden's website explaining the difficulties they had tracking it down when they were replanting their gardens to an original Gertrude design here.  Maybe I will manage to obtain some one day, but for the time being I'm enjoying Crocosmia Lucifer instead. 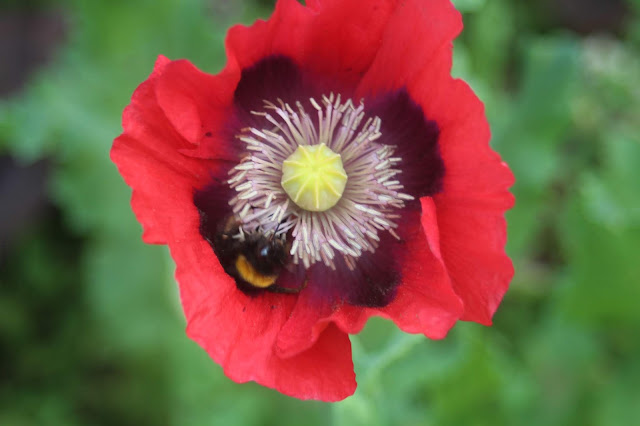 This bumble bee was enjoying getting in amongst the pollen.

5. The soft yellow of Achillea Credo is my next choice.  Another one from the Long Border where it provides height towards the back.  This is a much softer, and to me more attractive colour than the more commonly seen yellow achilleas.

6 Bishop of Auckland must be my favourite of the dark leaved dahlias.  Its similar in stature and flower shape to the popular Bishop of Llandaff, but in a softer plummy red, rather than the scarlet of that Welsh churchman.  This is also a plant from the Long Border where Gertrude's garden plan has a section of red and orange flowered dahlias.  The varieties she lists such as Cochineal and Fire King and not ones that seem to be available now, so I chose this one instead.  I think she would have approved.
Labels: Garden diary