The Long Border was the second area of the garden we developed, after the Rose Garden had been laid out.  It is a west facing border which stretches either side of an old summer house, backed by a hawthorn hedge at the north end and by the woodsheds at the southern end.  In order to provide a contrast to the Rose Garden, I wanted a make a border which would have its main season of flower in August and which would contain flowers in brighter, hotter shades of red, orange and yellow.  This border would contain crocosmia, rudbekia, heleniums, achilleas and kniphofias - plants I hadn't grown before.

I had bought a copy of Gertrude Jekyll's 'Colour Schemes for the Flower Garden', originally published in 1908.  In it Gertrude describes the main hardy flower border  at her own house, Munstead Wood, which looked at its best in later Summer.  Her descriptions, and the diagram of the border printed in the book, formed the starting point for our Long Border.

She had designed her border to show the careful gradations of colour which she was famous for.   The words quoted are from Gertrude's book.  The pictures accompanying them are of my garden.

'At the two ends there is a groundwork of grey and glaucous foliage - Stachys, Santolina, Cineraria maritima, Sea-kale and Lyme-grass, with darker foliage, also of grey quality , of Yucca, Clematis recta and Rue.  With this, at the near or western end, there are flowers of pure blue, grey-blue, white, palest yellow and palest pink; each colour partly in distinct masses and partly inter-grouped.'


'The colouring then passes through stronger yellows to orange and red. '

' By the time the middle space of the border is reached the colour is strong and gorgeous, but, as it is in good harmonies, it is never garish.'

'Then the colour strength recedes in an inverse sequence through orange and deep yellow to pale yellow, white and palest pink; again with blue-grey foliage.  But at this, the eastern end, instead of the pure blues we have purple and lilacs.'

Of course, the border isn't in full bloom yet.  As Gertrude writes, 'As it is impossible to keep any one flower border fully dressed for the whole summer, and as it suits me that is should be at its best in the late summer, there is no attempt to have it full of flowers as early as June.  ...so that at that time the big border has only some incidents of good bloom, though the ground is rapidly covering with the strong patches, most of them from three to five years old, of later-blooming perennials.' 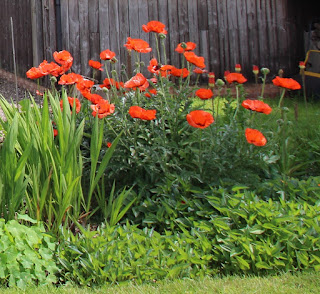 By July these gorgeous poppies will be over, but there will be plenty of other flowers to take over from them.