IN PRAISE OF THE ROSE

In June the roses are the highlight of the garden for me.  They are my favourite flowers by far.  I love the pinks, the purples, the creams and the apricot blooms.  I love the shapes of the cup shaped blooms, the rosettes, the perfect buds.  I love the variety in their fragrance and how on a warm evening I don't have to even bend down to smell them because their scent rises up and fills the air.  With the weather we've had so far, this isn't something I've experienced this year - but next week perhaps? 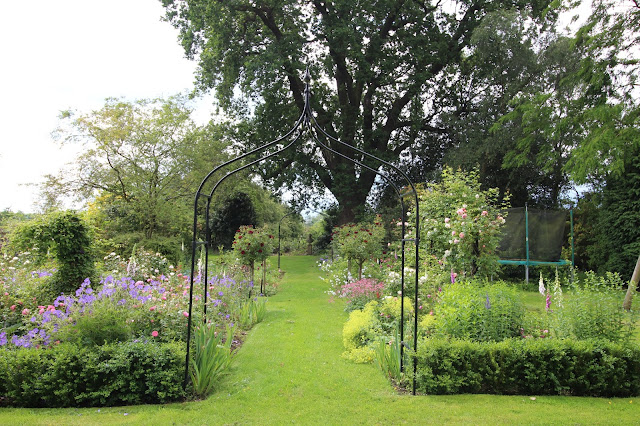 So this post is  a ramble through the roses in the garden in bloom now.  They are a mixture of shrub roses both old and modern as well as floribundas and climbers.  I had thought of writing about each type separately as they would be in a book on roses, but I have instead mixed them together because that is the way they grow in my garden. 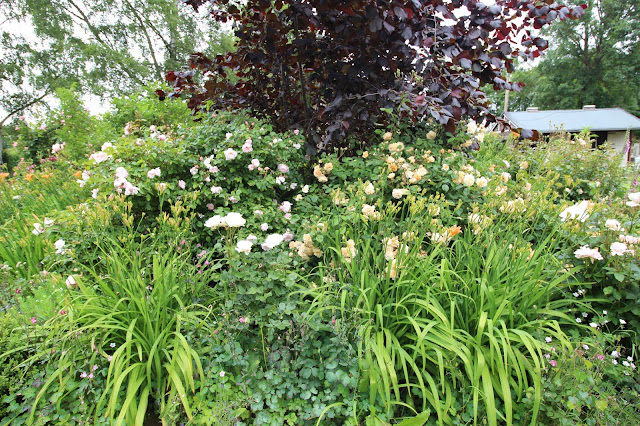 The Generous Gardener is an English Rose bred by David Austin and is one of the first roses I planted when we moved here.  I see that it is now marketed as a climber, and it is certainly a large shrub.  I grow it as a free standing bush and it has formed a framework of sturdy stems that completely disappear beneath its generous foliage.  It is currently in its first flush of bloom and produces its modest sized cup shaped flowers in small clusters.  The colour is a pale soft pink beautifully complemented by the red stems.  Its fragrance is described by David Austin as hints of Old Rose, musk and myrrh.  Its only drawback as far as I am concerned is that it produces so may flowers in that first flush that dead heading them is quite a chore.  This is entirely my fault for planting it at the back of the border where it is difficult for me to reach. 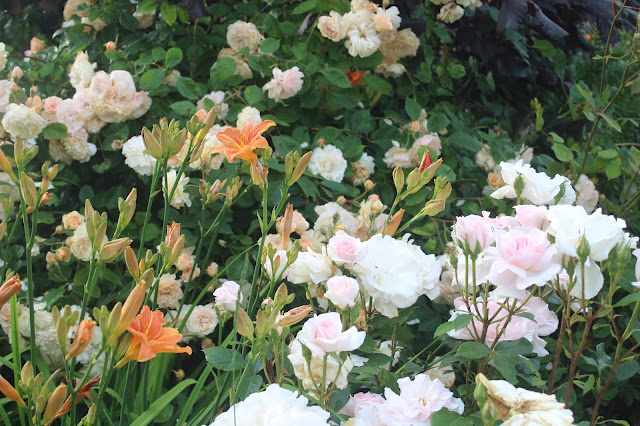 In the photo above, Buff Beauty is in the background with Margaret Merril in the foreground. Buff Beauty is a Hybrid Musk rose; those roses bred early in the 20th century, after the Victorian roses, but before the English roses bred by David Austin. It is a shrub rose, with clusters of small peachy flowers which fade to creamy white.  It is currently in its first flush of bloom this year and is absolutely smothered in flower.  Its soft colouring would blend attractively with many other shades.   Its not a rose which shouts out at you to grab your attention, but sits quietly in the background.  It is healthy and smells beautiful and I would highly recommend it.


Round the other side of the Purple beech is my favourite rose of all ... 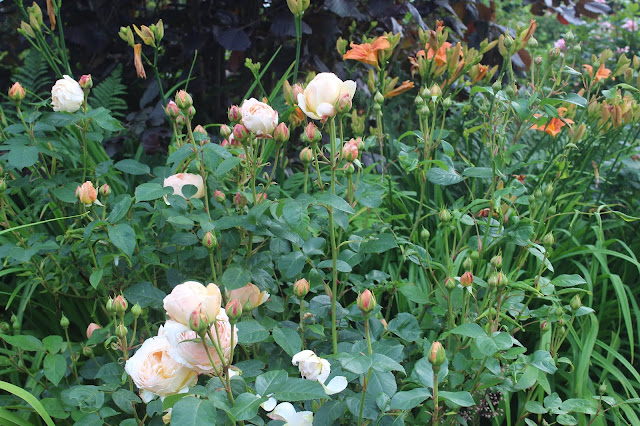 This is Jude the Obscure from David Austin roses.  Don't let the name put you off.  Jude the Obscure may be one of the most upsetting books ever written, but the rose of the same name will bring you nothing but joy.  The cup shape blooms are not so heavy that they hang their heads, but look up at you.  The flowers are large but appear in perfect proportion to the size of the bush.  It is a stunning shade of pale peach.  For reasons I don't understand, David Austin refers to the colour as medium yellow on the inside and pale yellow on the outside, but all three bushes in my garden are pale peach and lovely.

The perfume is quite unlike other roses.  Its like inhaling fruit salad made with nectarines and tropical fruits and fizzing with sherbert.  I cannot walk past this rose without stopping for a smell.

The next rose I want to introduce to you is climbing over this arch.  It is called Compassion and I also have it growing nearby as a tall bush.  As with the rest of the roses in this area of the garden its flowers are in warm tones.  It's pink petals shade to yellow at their base, giving the over impression of salmon pink. 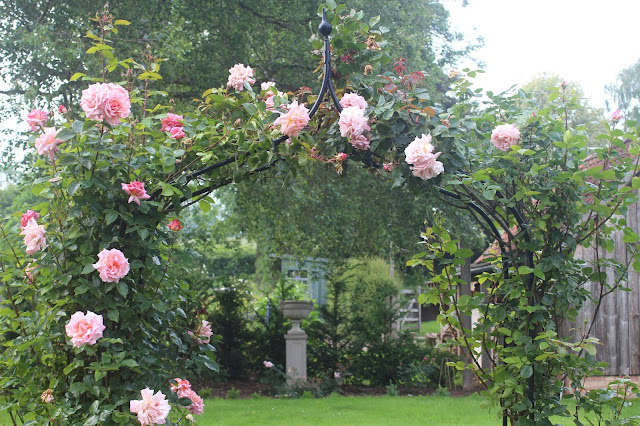 Compassion is a climbing hybrid tea rose and has flowers which are typical of that type.  As the flowers open from pointed buds, the petals gradually fold back on themselves to form what many would regard as a classic rose bloom.
I must admit to ordering this rose based on a totally misleading photo in a catalogue (I shall name no names), and whilst it is nothing like the rose I thought I was getting, it is one I am pleased to have.  It has a lovely classic turkish delight rose fragrance.  As I was tying it into the rose arch last week, I cut off a couple of surplus stems and brought them into the house where they perfumed the room in which they were put.  It is a vigorous and healthy rose which throws up more stems from the base than I know what to do with.  It certainly keeps the arch well covered with flowers all summer. 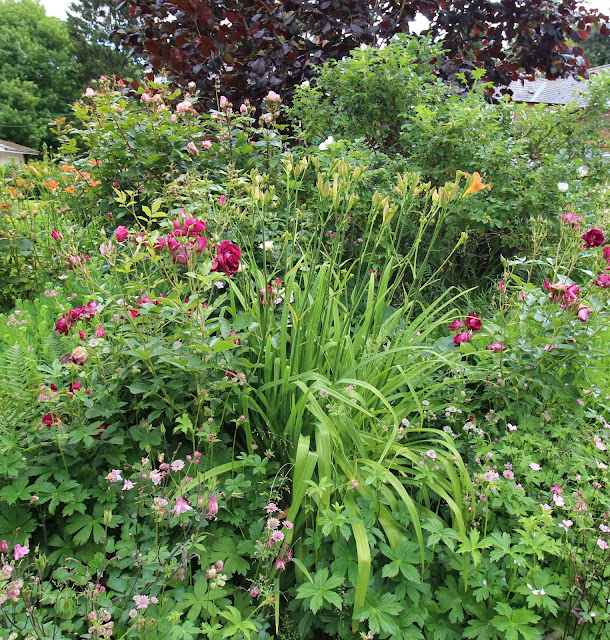 The plum coloured flowers of Burgundy Ice mingle with astrantias in this section of the border.  This rose only has its colour to recommend it - but what a colour it is.  It is rich and fruity, without any hint of magenta to it.  Its fragrance is not significant and the bush itself is on the spindly side.


As the last rose for this post I have a rose whose name I do not know.  It was growing in the garden when we moved here, although I might possibly never have found it.  It had become overgrown by spotted laurel so that it could barely be seen.  It was able to make one bloom and send it out on the end of a long stem to reach the light: kind of rose distress signal.  I spotted it and the rose was moved to a little border which it shares with some lavender and sedums, but away from the other roses as its colour would not mix happily with them. 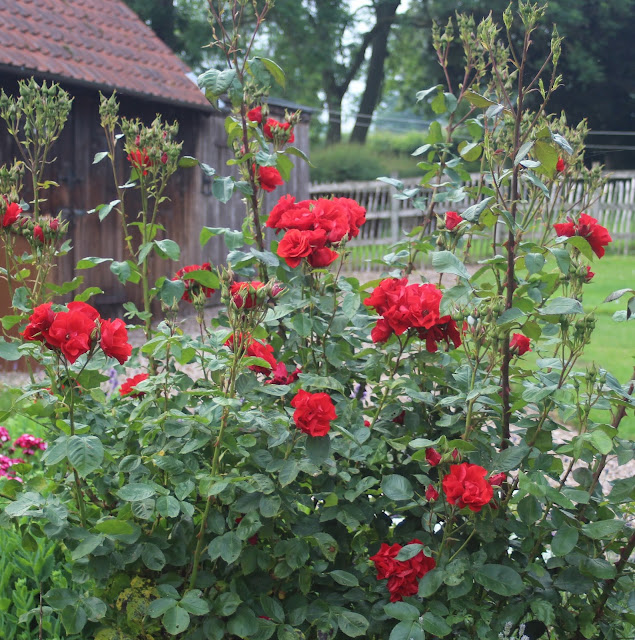 Its a floribunda with scarlet flowers whose colour does not fade as the flowers age, so it always seems to be in flower.  It grows like crazy!

There are roses in pale pinks and white in the other parts of the Rose garden which there is not time to write about now, but which will make up the next post.
Labels: Roses The Rose Garden