A mostly mild and cloudy week enabled me to get out and sort out the pots.  The trees are still looking pretty with their golds, reds and yellows. 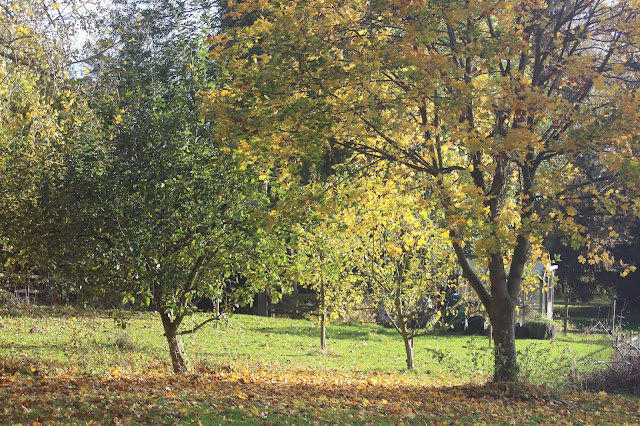 The Sycamores and Field Maple may not be the most exciting trees for most of the year, but they turn a wonderful colour this time of year. 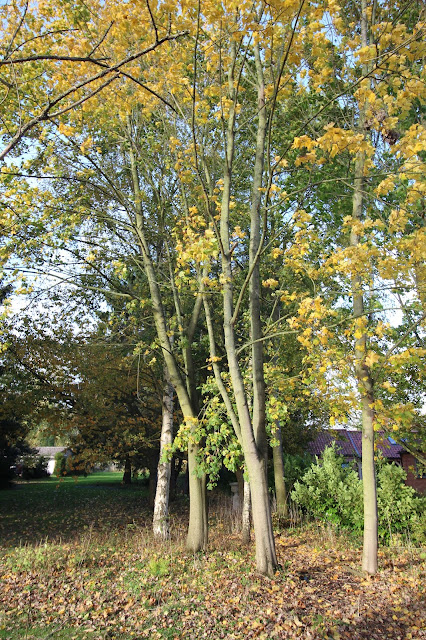 Although we've lived here over 10 years it wasn't until this Summer that we counted how many trees there were in the garden.  I was a quite surprised to find there were over a hundred.  It certainly doesn't feel like there are too many but it does explain why there are so many squirrels and pigeons.
The photograph below I've entitled (with apologies to William Frederick Yeames)  'When did you last see your lawn?' 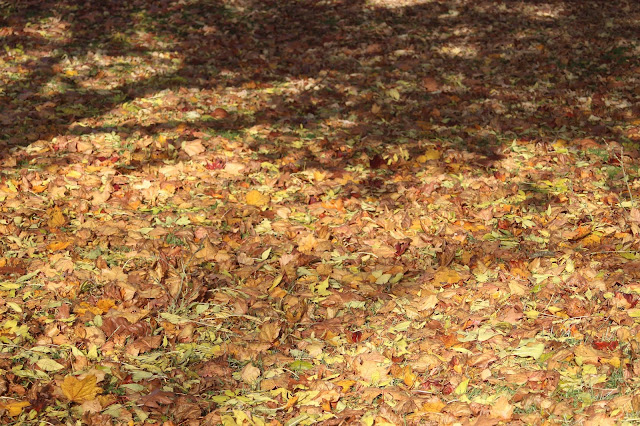 Mr B is hoping that we get some strong southerly winds this week which will blow all the leaves against the back hedge where they can be easily collected up for the leaf pile (or just ignored).
Also happening in the garden this week was a big change over in the pots.  Here are the auriculas.  They've spent the Summer outdoors in a shady spot, but I've brought them into the greenhouse so they stay drier over the Winter.  I need to get some nice grit to dress their little vintage terracotta pots.  They are nothing fancy in terms of varieties but they give me a lot of pleasure. 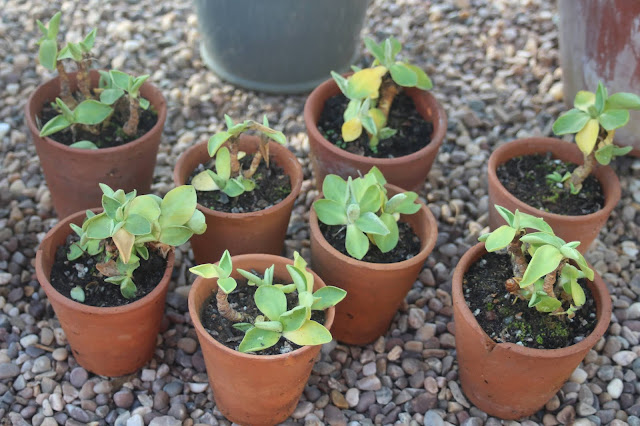 I also planted up this stone trough.  In the bottom went some tulips and Narcissus Tete a Tete.  I don't know whether these will happily follow on from each other or whether they will be trying to elbow each other out of the way.  Time will tell.
In the mean time I thought some primulas would fill in the gaps.  I've had these ones for years and plant them out in the vegetable patch over the Summer.  They were obviously happy there as they have produced loads of offsets which I split up. 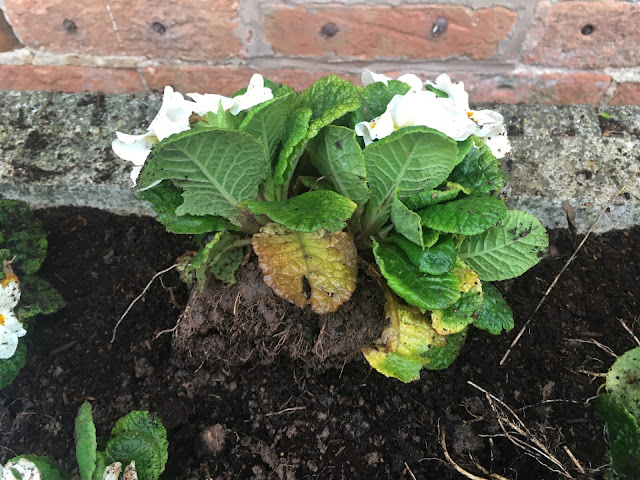 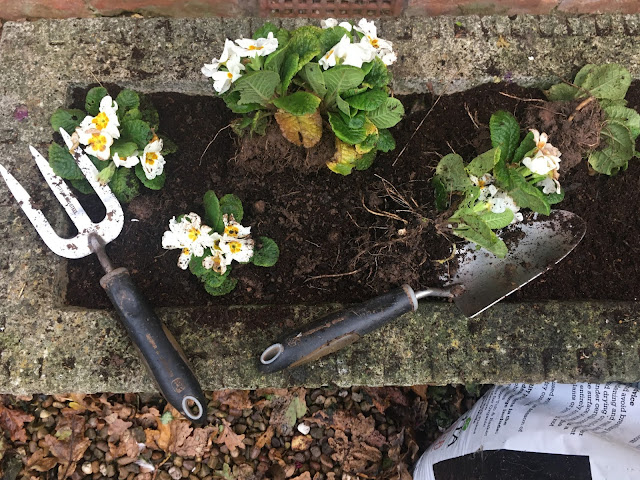 Then once it all looks pretty I put these ancient hanging baskets upside down over the top.  This is because
a) the cats think I've installed a new port-a-loo just for them, and
b) the squirrels think 'oooh yum - I bet there's some lovely bulbs in there' 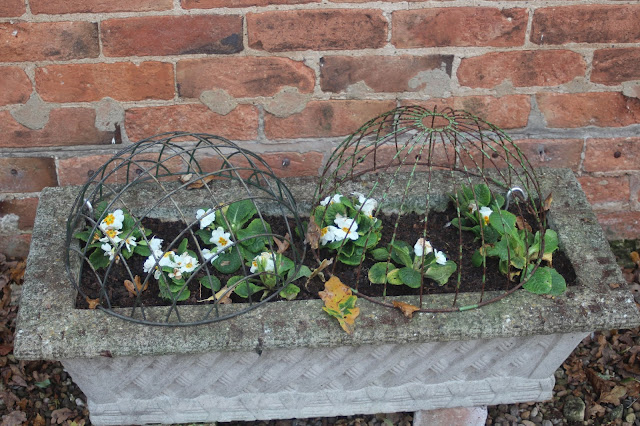 We've done auriculas and primulas, so that leaves polyanthus.  A four pack of these was purchased from the local garden centre, and were popped into some more pretty terracotta pots.  Only the white one is in flower, but the leaves of the others look darker and I'm hoping for some rich dark red or blue flowers. 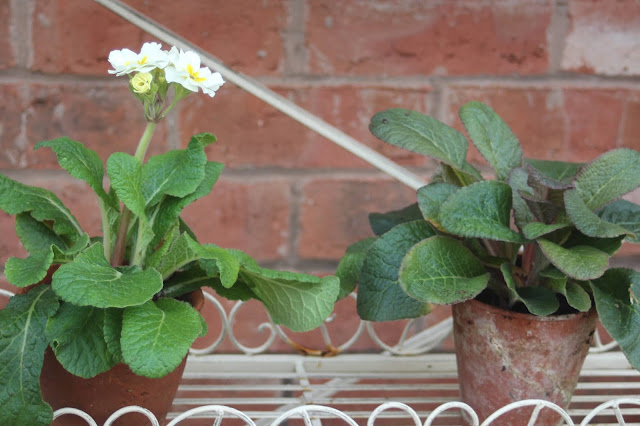 Waitrose were selling this silver leaf cyclamen, which I thought was very pretty.  It's been patiently waiting its Six on Saturday turn until the garden was looking bare. 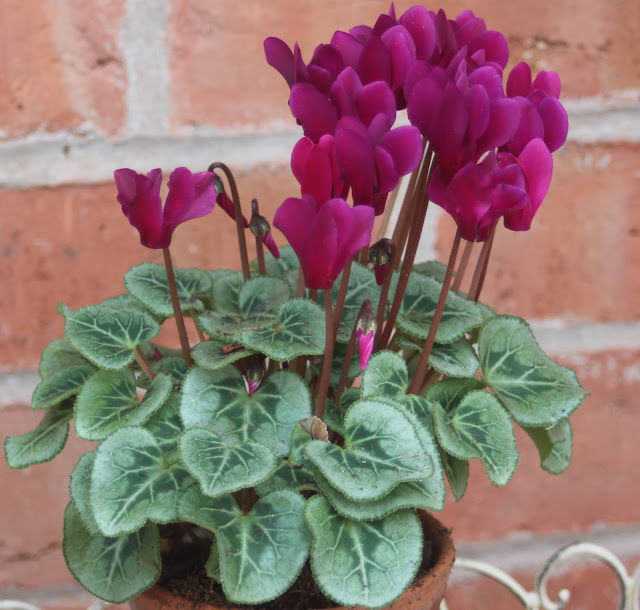 These pots have been planted and put in the greenhouse, but there won't be anything to see until Spring.  Some have Hyacinth 'Woodstock', which I haven't grown before, but admired on other Sixes and in real life too!  The large shallower pot is full of Iris Reticulata and several smaller ones have a few Narcissus Tete a Tete that were left over from the trough. 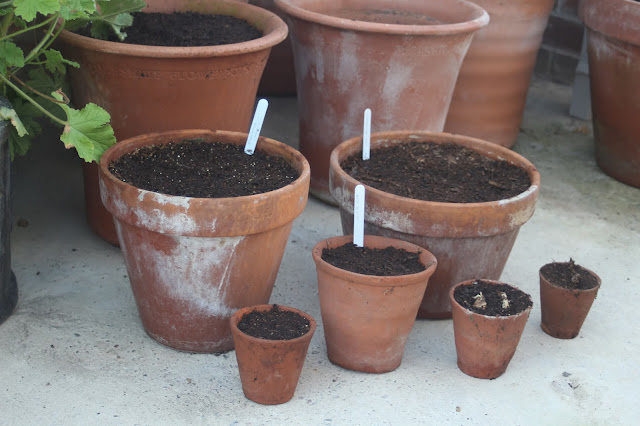 That's all I have room for this week.  Enjoy your weekend.
Thanks as always to the Propagator for hosting Six on Saturday.