The Knot Garden is planned to be at its best in May.  This year it may not at its best yet (hence my attempted pun in the title).  But with some sunshine on the way, next week I think it will really get going. 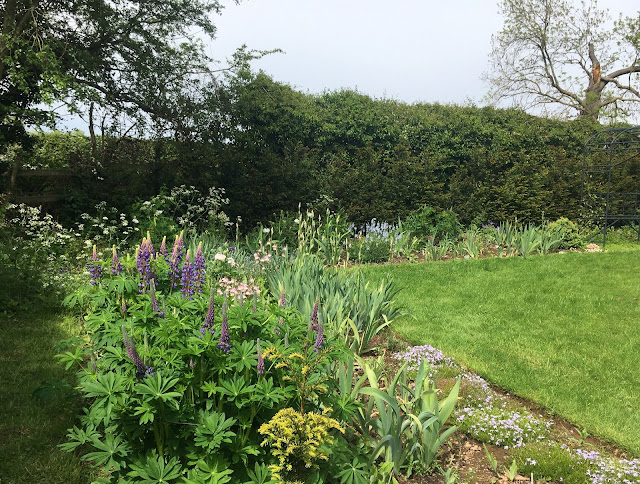 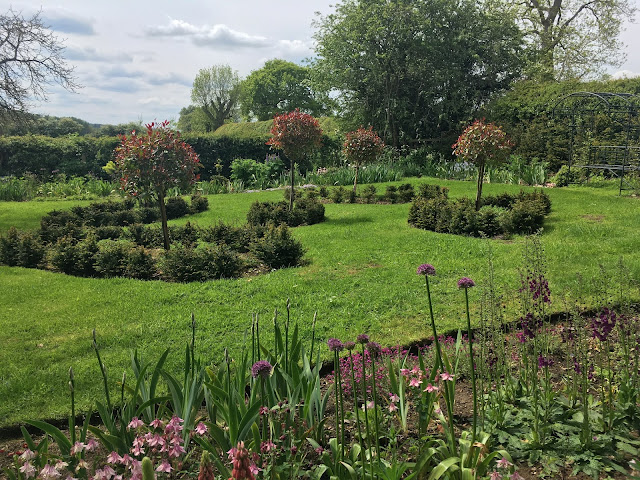 Looking down the purple border, there are plenty of buds on the Lupins but I think the late frosts have affected the earlier Iris varieties, which have very few blooms. 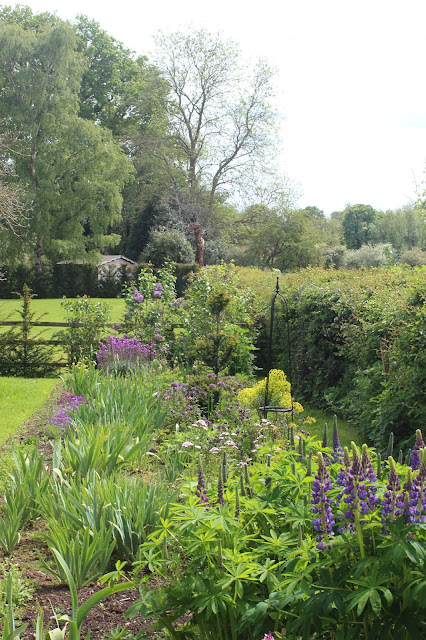 At the far end, Lilac Michael Buchner has started to bloom, and smells wonderful. 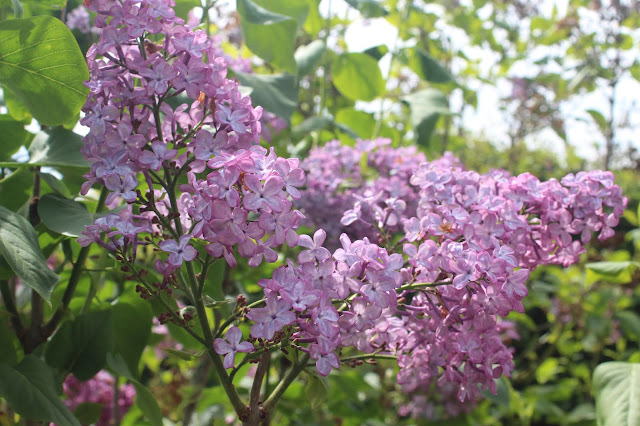 The Lupins, in shades of blue and purple are putting up their flower spikes.  The growth these have put on in the last two weeks has been phenomenal.  I grew these from seed a few years ago and then had to keep moving them around to fit the colour scheme.  Most of them survived this rough treatment!  So far there's been no sign of the dreaded lupin aphid. 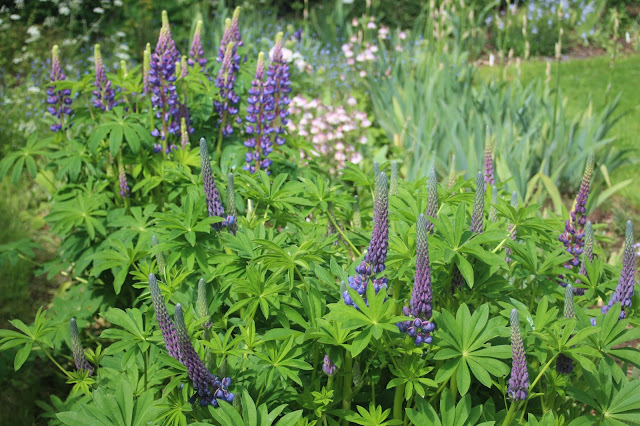 Looking along the purple border, from the other direction, are some Allium Gladiator, in their second year of flowering.  They are much taller than last year (good) and each bulb has produced two somewhat smaller flowers (not so good). 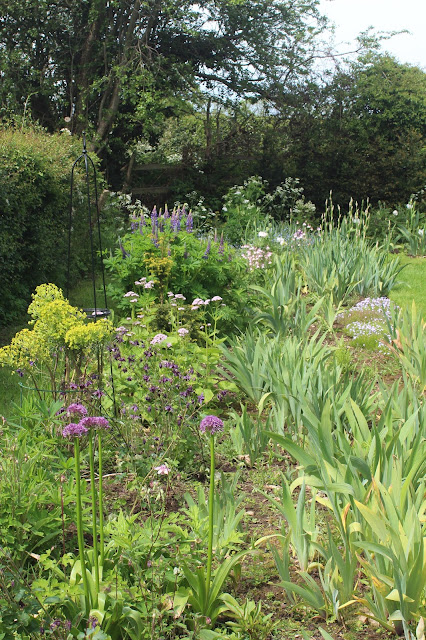 Over on the other side of the Knot Garden where colours are pink and burgundy, this nameless Iris has opened the first of its flowers. I am fascinated by how easy it is to snap up and replant Iris rhizomes and now have a long sweep of these from that original plant I started with. 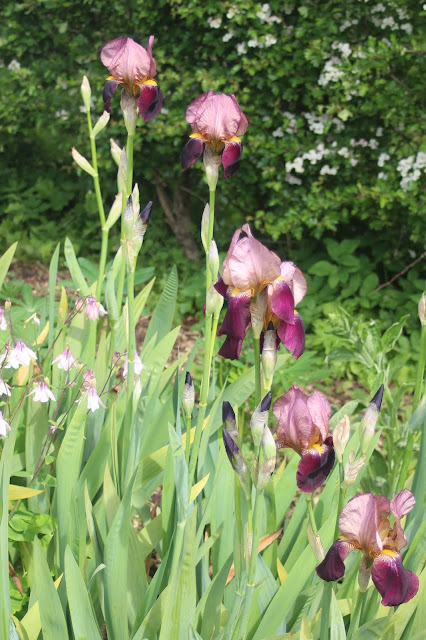 This pretty two tone aquilegia fitted the colour scheme here better, so I moved it while it was in flower  (hears chorus of disapproval). 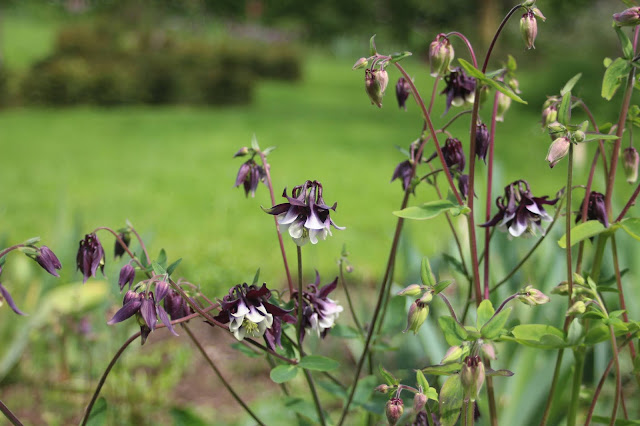 As I walked through the Rose Garden yesterday afternoon I could smell the musky perfume of Box.  It was the first time this year that it has been warm enough to release the fragrance.  The recent weeks of rain have made the garden grow lushly and weeds spring up seemingly overnight. There's plenty of weeding to be done but luckily the strulch mulch has kept the weeds down in the Rose Garden.  The Sambucus 'Black Lace' makes a nice contrast to all the green foliage. The rather obvious gap is where some Penstemon are being very slow to get going and may need replacing. 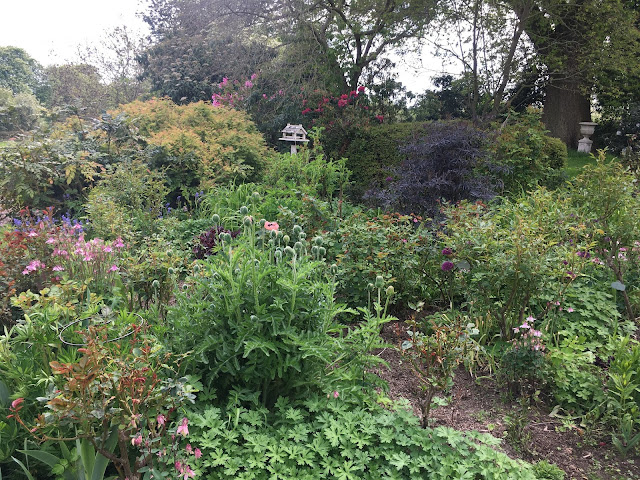 There's also the tomatoes to pot up in the greenhouse and the Second Vaccine Jab later today as well.   I hope you have an enjoyable weekend and some lovely weather.
Thanks as always to the Propagator for hosting Six on Saturday.