After last week's weather, which was mixed to say the least, it was good to be busy in the garden this week.  And busy I certainly was except for the afternoon I sloped off to the garden centre and went shopping instead.

While the garden is looking a little tidier, it's still not looking very floriferous, so I'm opening with this photo of the front garden, because the horses were posing for me so nicely.  (Actually I think they are hoping someone will come by with something nice to eat.) 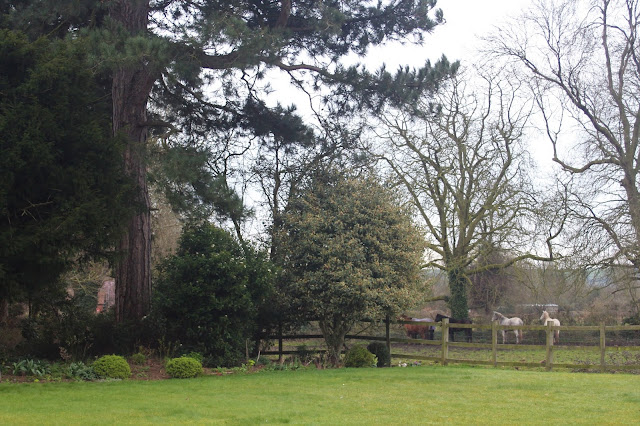 The other reason for including this photo it that it is the home to this week's number 1.

After last week's discussion of the merits of Bergenia, I saw this at the garden centre and decided it would make a good addition to the garden.  I've had a few problems over the years with plants (mainly mail order) which weren't as advertised, so it was good to choose something in flower and know it was just right. 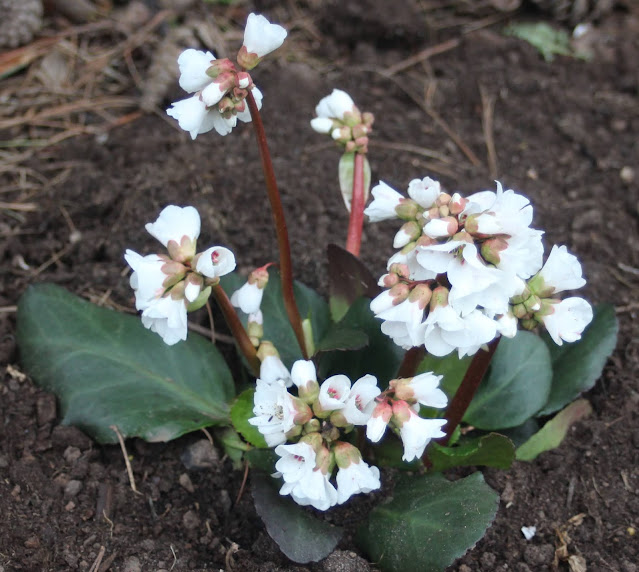 Here's Lord Byron sunbathing in the Spring sunshine last week, with the border of early Spring flowers paying homage at his feet. 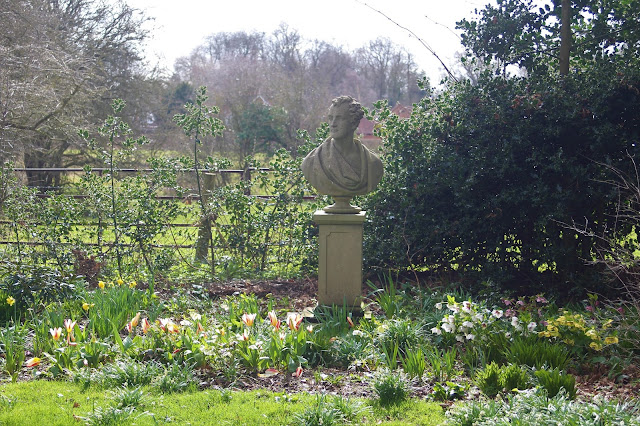 The Hellebores are fading a little, but doing it in a very graceful way. 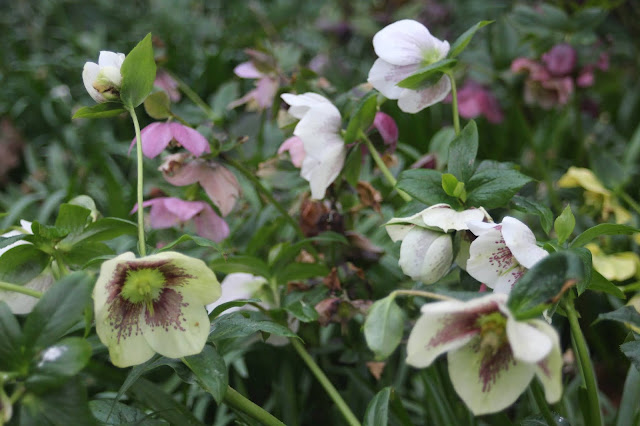 Some of the smaller spring bulbs are less familiar to me. The first of these is  chionodoxa forbesii -  reliably coming back each year.  It is a pretty shade of pale pink only someone seems to have forgotten to tell my camera that. 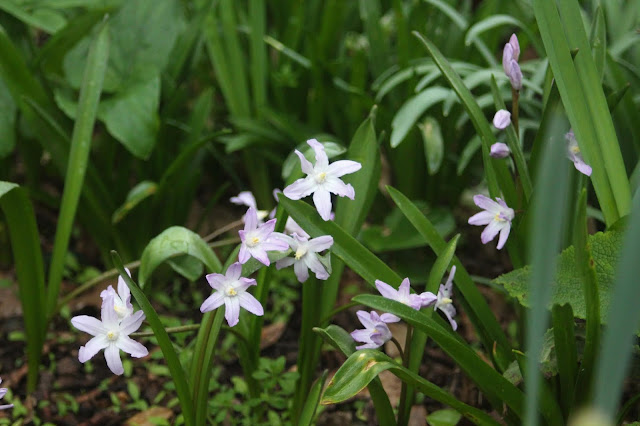 Another of these little Spring jewels is Puschkinia Libanotica.  This one is the washed out pale blue that it appears in the photograph. 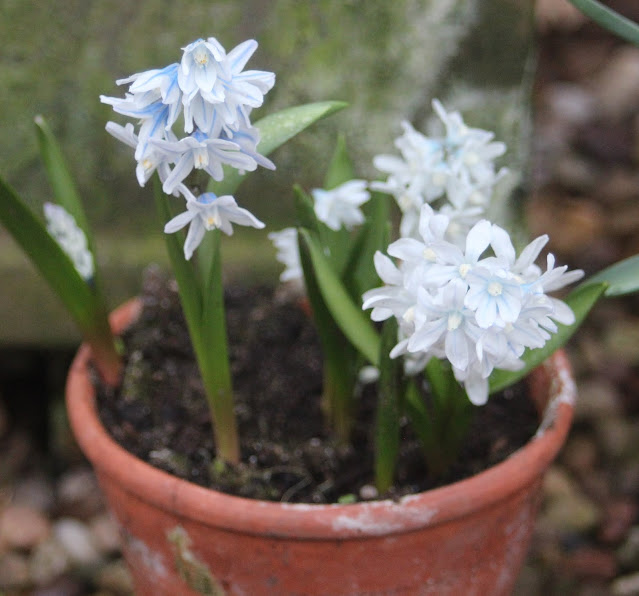 Clematis 'Polish Spirit' syn Morrisonii,* has well and truly outgrown it's support and has been treated to a giant 2.5m high obelisk.  I hope it's suitably appreciative.
* Purchased for a nominal sum from Morrisons 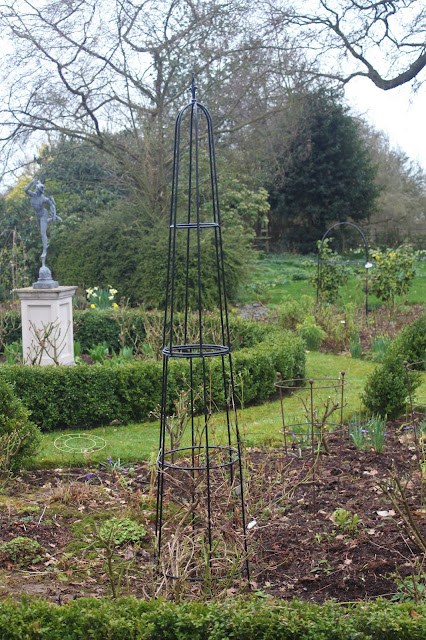 When discussing Bergenia last week, I went off on a little tangent mentioning Christopher Lloyd's book 'The Well-Tempered Garden'.  I made the mistake of thinking - 'it's a while since I read that book, I really ought to re-read it'.  It opened at a chapter on pruning clematis.  Group 2 (trim lightly) could, as a counsel of perfection, be taken off it's support, all the entwining tendrils snipped through and the long lengths laid out on the ground.  The dead portions, of which there are quite a few as the plant produces more growth than it is inclined to need, can then be cut out, before the stems are reintroduced to the support.  Christopher implied that you'd have to be mad to want to that.
So I did it , and this is the result. 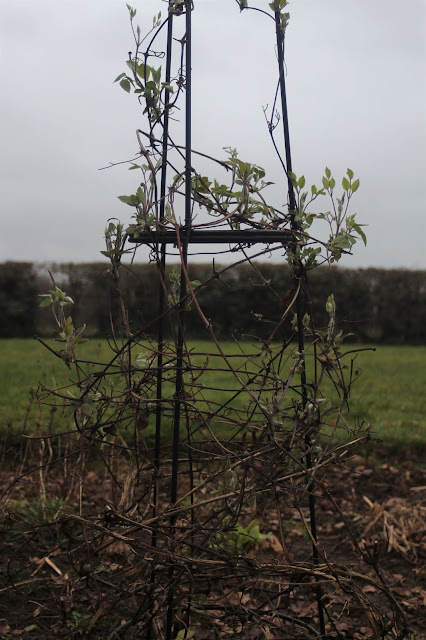 5. Strawberries under Glass (or why planting 10 strawberry plants took me all day)

Last year the surplus Strawberry plants that I didn't have room for in the garden did so well in the greenhouse that I decided to repeat the experiment on a larger scale.
You know those jobs that just grow and grow?  I ordered some fruit trees.  The supplier also sold strawberries, so I might as well order a few of those since I was paying the delivery charge anyway.  Once they arrived, I then had to dig up some of the strawberry patch to make room for them.  The dug up strawberries then needed to be put in pots.  The pots were occupied by almost certainly dead pelargoniums which need to be turfed out first. And so it went on.
But I think I've bored you enough. 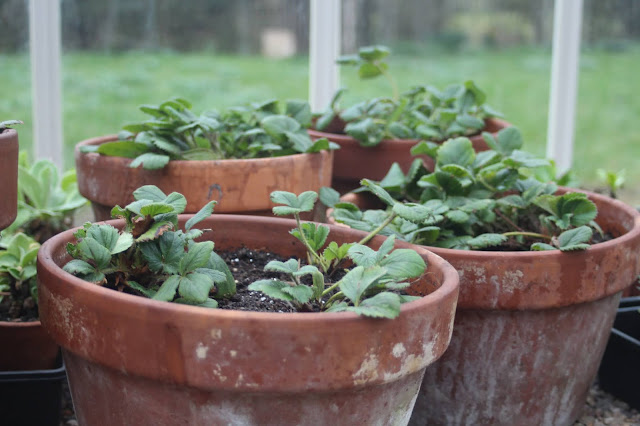 When you take over an old garden, if you are lucky, you will inherit some lovely mature plants.  You will also, almost certainly inherit the Daffodil Jumble.  At some point in the past a previous owner will have bought one of those giant nets of mixed Daffs and liberally sprinkled them around to take you by surprise.

Some surprises will be nice 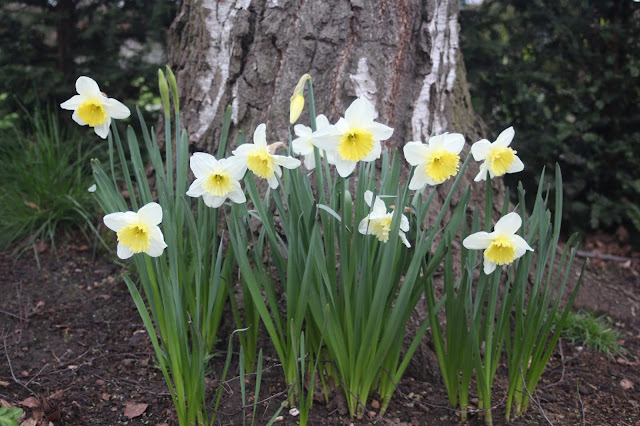 Others, when you declare your intention of digging them up, will be described as 'cheerful' by your spouse. 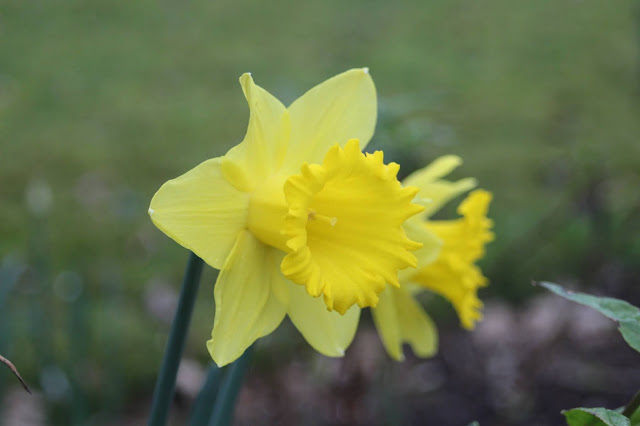 That's all I have time for this week.  Wishing you some good gardening weather this weekend and thanks as always to The Propagator who hosts Six on Saturday.