POTTERING IN THE GARDEN

The weather has been very pleasant - not too hot and not too cold - just like Goldilocks and the Three Bears.  Just right, in fact, for a gentle potter in the garden, doing all those undemanding, rather time consuming, jobs.

In the long border, I've been cutting back all the browning stems, deadheading and tying in flopping plants. 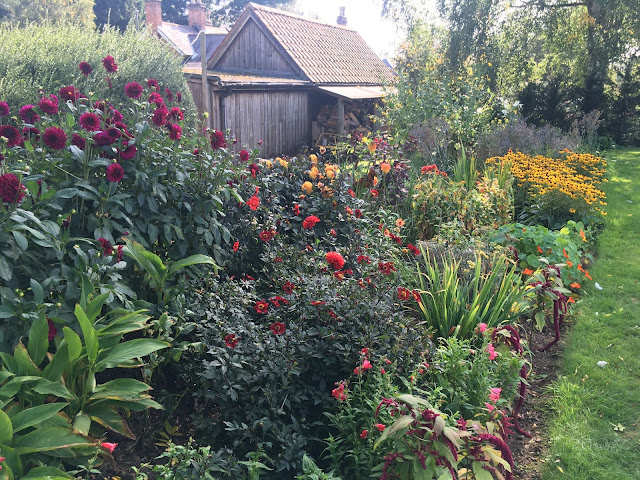 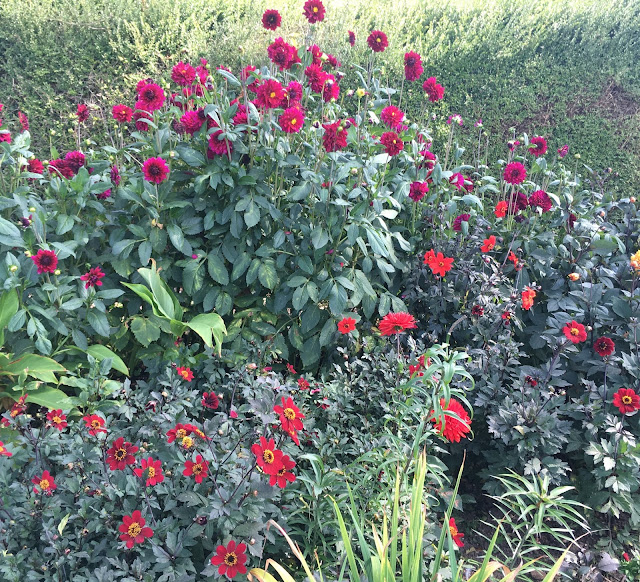 I've cut the box hedging and the stand alone pieces that are cones or pyramids or something.  This has been done with trepidation in case cutting them allows in the dreaded box blight, which we've not had yet.  I chose fine sunny days with a light wind and low humidity, so now it's a case of fingers crossed and hoping for the best.
By the way, I've cut everything by eye (no canes or string or measuring) for the country garden feel and not because it seemed too much of a faff. 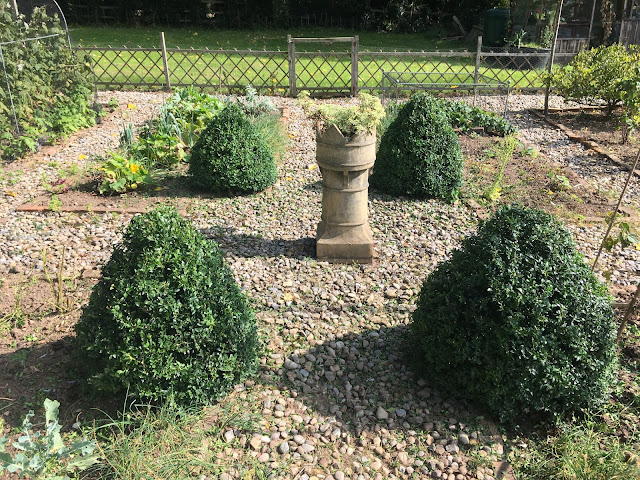 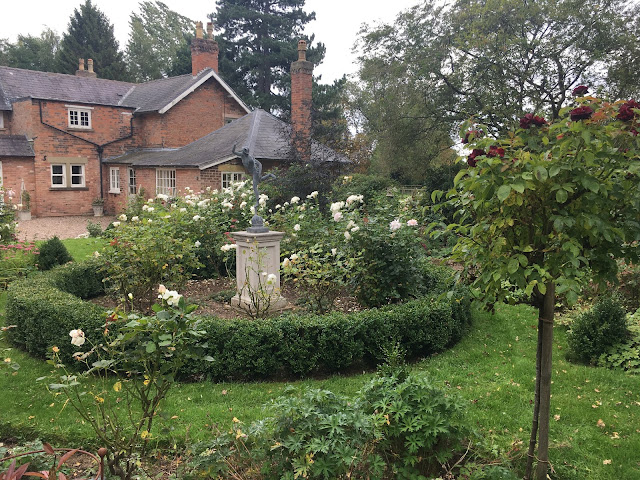 I read a review of a garden once where the writer complained about the bare soil.  I would rather see weeds than bare soil, they wrote.  I'm firmly in the opposite camp.  I rarely have the time to remove all the teeny weeny weeds, but it is so satisfying to do it and see all the lovely crumbly brown earth instead.  (And the cat likes it too, but the less said about that the better). 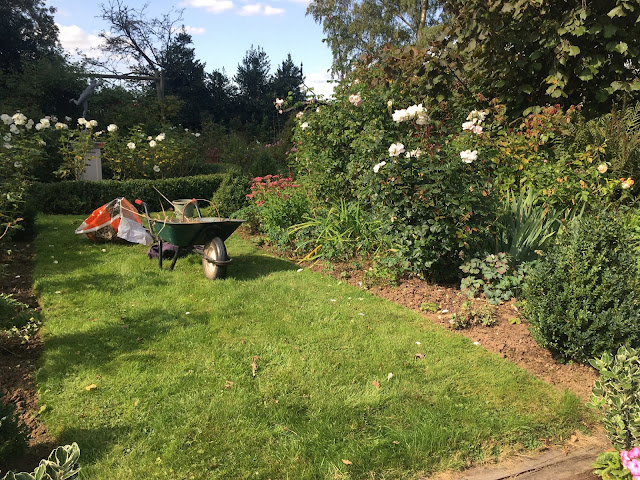 4. Up close and personal

I recall Alan Titchmarsh writing that he liked weeding because it gives you the chance to get up close to your plants and enjoy them.  Here in this weeder's eye view of the Rose garden borders, are the Penstemons I grew from cuttings last year, and behind them the Sedums covered in bees. 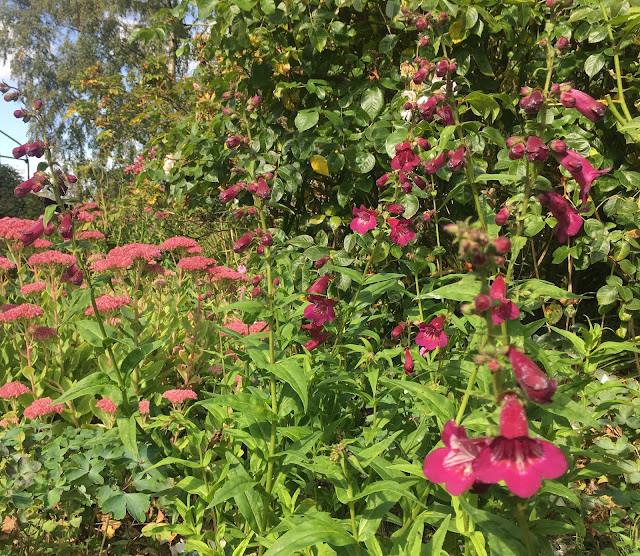 I love courgettes, but my success in growing them has been hampered, I think, by lack of watering.  The only year I've been really successful with them was the year the tap was leaking, and the resulting overflow was diverted to the courgette patch.
This week I've taken to watering them at least every other day.  So far its looking promising. 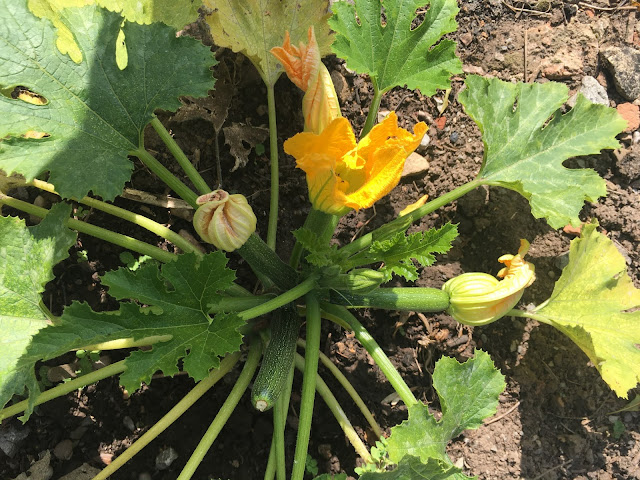 A few weeks ago I wrote about the peppers I had grown from seed. I'm please to report that they are now turning red. 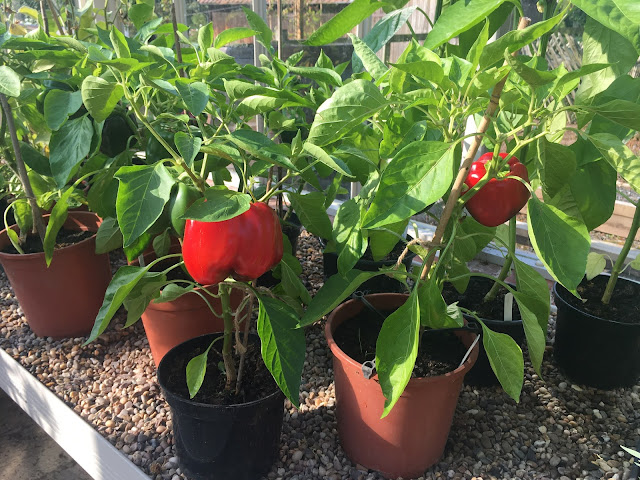 That's all from my garden for this week, but there are plenty more to visit on The Propagator where gardeners from around the world share their Six on Saturday posts.