Despite my optimism that this bad weather cannot last much longer, it does seem that we have another wet and windy weekend ahead of us.  Not every day has been gloomy though.  There was some mid week sunshine.  The flowers know it's Spring and along they come regardless.

There are a few clumps of these double daffodils near the apple trees.  They come along reliably early each Spring.

I believe that these are Telamonius Plenus, also known as Narcissus Van Sion, a variety which dates back to 1620.  It's an untidy looking flower, with some parts a deeper yellow than others.  Is it possible these have been growing here since the 17th century? 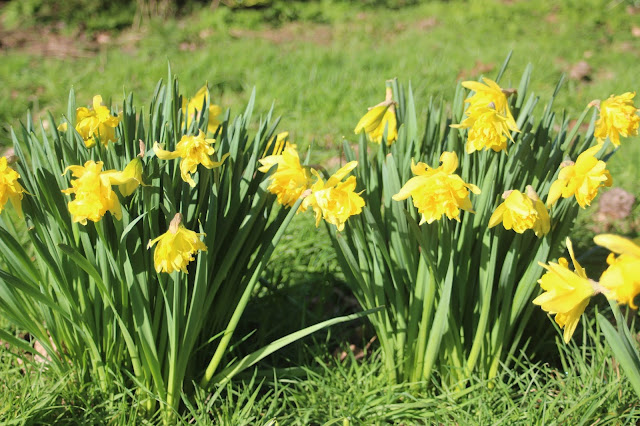 I'm always intrigued by such survivors from gardens long ago.  I wonder to myself  who planted them and when.  Small groups of Crocus in lavender, white and purple appear in the Rose Garden at this time of year.  There were no flower beds here when we arrived.  Were there some in the past?  Did a Victorian gardener plant them in their borders, or was it a 'low maintenance' gardener from the 1970's who put them in to brighten up an expanse of lawn? 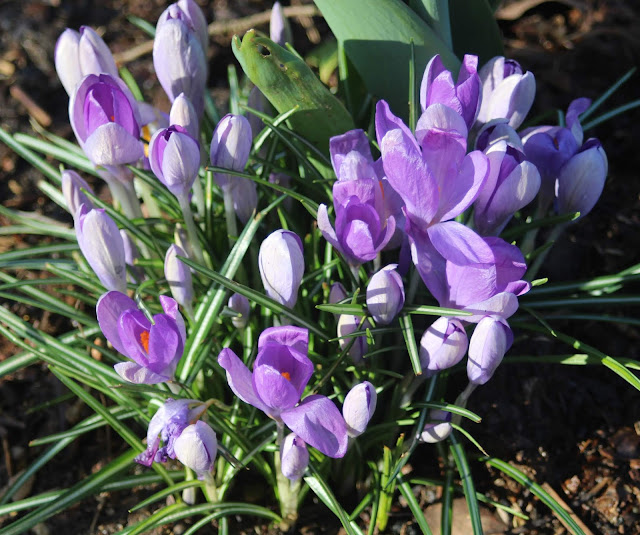 In the long border are Kniphofia.  Catalogue descriptions of Kniphofia state that they flower in late Summer.  Mine flowered in June last year and despite dead heading didn't flower again.  I've bought a couple of different varieties to try this year, to see whether these will flower any later. 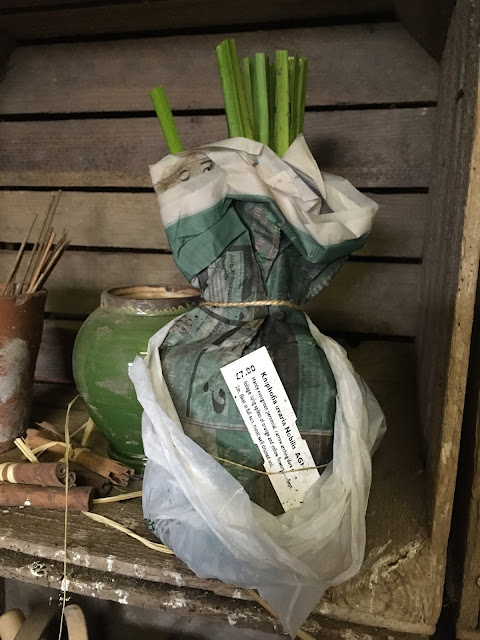 As part of my drive to reduce plastic in the home and garden, I ordered these from Great Dixter nurseries.  They take the plants out of the pots before packing and wrap them in newspaper and compostable bags.  They even arrived in a reused cardboard box.

I've been bought a new toy this week and I've been busy turning these branches into wood chips.  The branches have been blown down in the recent windy weather and the wood chips have been used as mulch under shrubs and hedges. 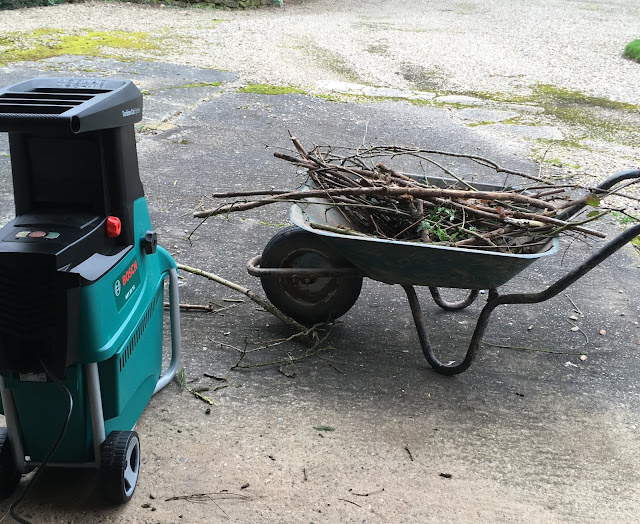 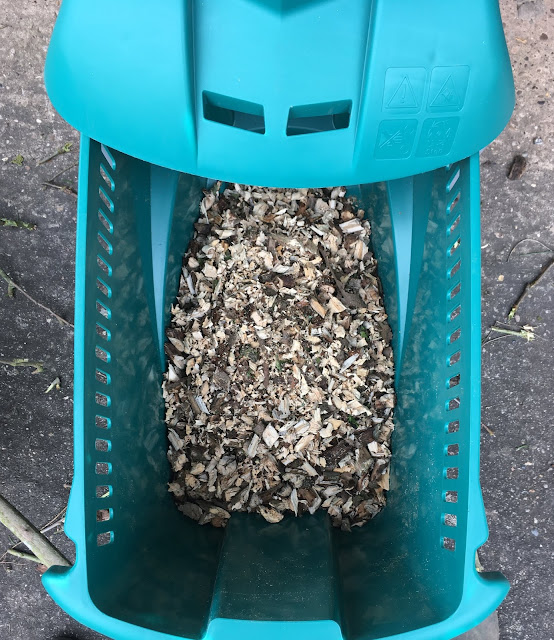 I've also cut down the herbaceous perennials in the long border and they've all been shredded too and added to the compost heap.

My tomato seeds have germinated.  I could have shown you a picture of the seedlings, and no doubt I will one week, but for today you get a photo of the seed packets instead.  This also shows that it's not all shopping at Great Dixter, and that I do have a more frugal side. I haven't grown Black Russian before, but the others are packets from previous years. 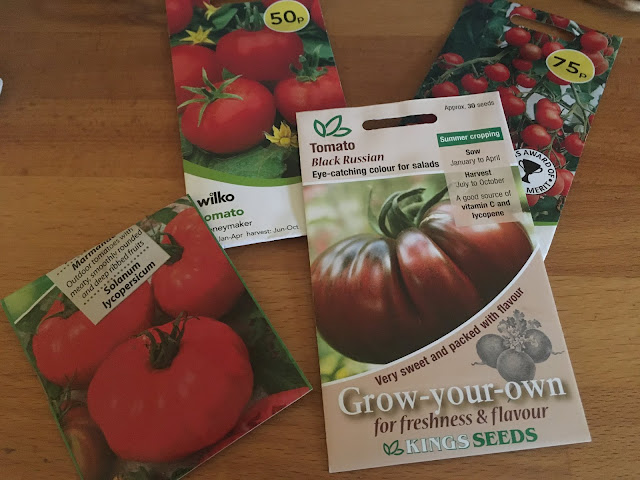 Obviously I'll be hoping to free up the kitchen work tops soon, by moving them out into the greenhouse,  and on that topic ......

It's looking a bit full for this time of year, to be honest.  Quite a lot of spring bulbs are still in here.  There are alliums, tulips, leucojum aestivum and cyclamen.  All waiting for me to plant them out. 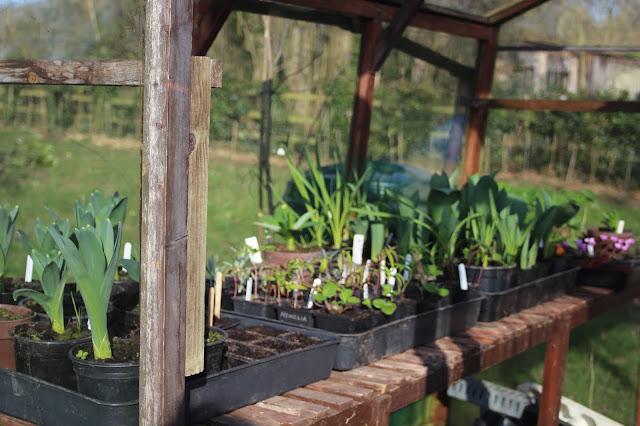 But I can't face turfing these out just yet to battle against the S and S's.  I'm going to admire them in all their un-nibbled prettiness for a little while longer. 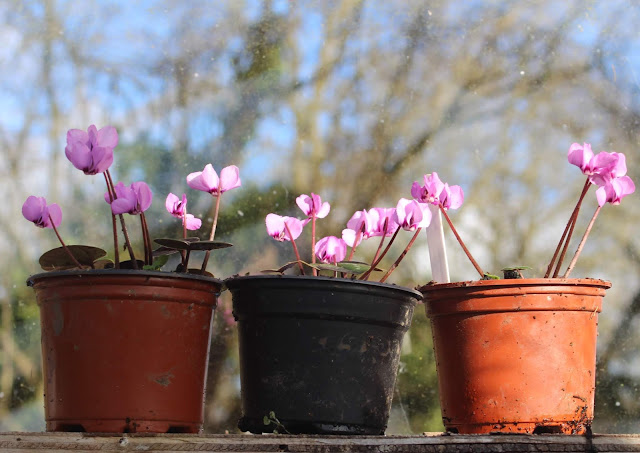 That's all from my garden this week, but if you'd like to see more from gardens in the UK and beyond, then please visit The Propagator.  If you'd like to take part in Six on Saturday yourself, then all the instructions you need are there.